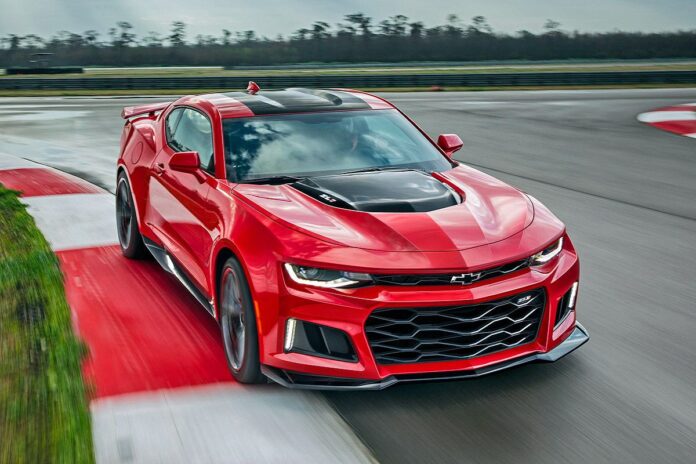 According to the latest news, the forthcoming model will get a new color, minor changes to equipment structure, and some powertrain enhancements for SS and ZL1 models. As you probably know, this model is available in two variants. There are two-door coupe and two-door soft-top convertible models. Both versions are looking attractive, and both will arrive next year as 2022 models.

Is Chevy Discontinuing the Camaro?

From what we heard, the upcoming Camaro will be the last model year. This is very sad news for Pony car enthusiasts. However, like the previous-generation, the new Camaro will continue to ride on the same GM’s Alpha platform. If you didn’t know, this platform is also shared with the vehicles such as Cadillac ATS, Cadillac CTS, Cadillac CT4, and Cadillac CT5. The last year’s Camaro received a mid-cycle refresh providing a more funky look.

This model comes with the new bumpers, refreshed front and rear, as well as the coupe’s LED headlights. Like we saw redesigned headlights on the Blazer model, the new Camaro will feature even thinner headlights. Thanks to that, it will look more aggressive than before. As we already mentioned, the two-door soft-top convertible model is also available, providing the same design.

The upcoming 2022 Chevrolet Camaro will feature a modern and sporty cabin. Like the predecessor, the layout remains the same. Basically, the new model can accommodate four occupants. Generally, the interior is traditional and is a mix of old and new. Chevy added numerous chrome surrounds on various controls. However, the Camaro’s sleek exterior design resulting in some ergonomic issues inside the cabin. The tiny window provides a still claustrophobic feel, and Chevy used some cheap black plastic inside.

There are four engines available in the 2022 Chevrolet Camaro. The first one powers base model consists of a 2.0-liter turbocharged 4-cylinder that produces 275 horsepower and 295 lb-ft of torque. Optionally, one can step up and get a more potent 3.6-liter V6. This unit offers more power 335 horsepower than the base one.

Camaro SS is also available, and it`s powered by a 6.2-liter V8 pumping out 455 horsepower. This engine can also be found under the Corvette. The most potent engine powers the ZL1 model. This engine, thanks to a 6.2-liter supercharged V8, delivers 650 horses. Depending on the model, the manufacturer offers 6, 8, and even 10-speed transmission.

The refreshed 2022 Chevrolet Camaro is coming, and it will look more aggressive than before. GM reveals that the next-gen model will be available in the third quarter of the 2021 calendar year. In terms of price, we believe that the new model will cost significantly more than the predecessor. The current model LS coupe starts at about $26,000, including destination charges. However, LT is priced at $26,500, while LT1 starts just under $35,000 with a manual transmission.

Going for the SS trims, buyers must pay $38,000. The most equipped model, ZL1, can reach nearly $62,500, while the track-focused ZL1 1LE model passes $71,000. Moreover, if you are interested in convertible models, one can get it for $33,000, which is $7000 more than the entry-level coupe. Thanks to various engine and equipment options, the new Camaro will rival Ford Mustang and Dodge Challenger models.