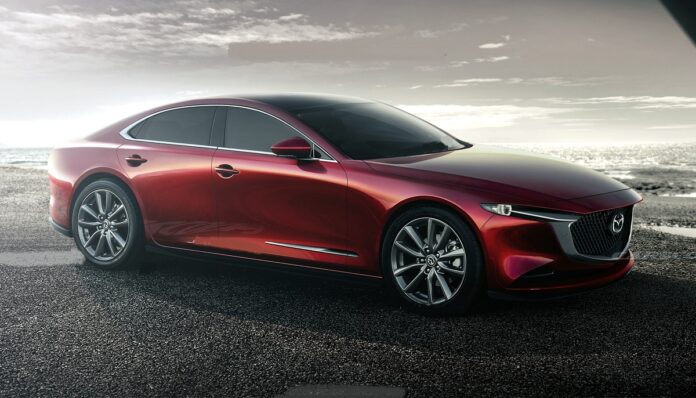 Japanese carmaker’s next-generation 2023 Mazda 6 is rendered and it is wearing the new Mazda’s Kodo design language. Proportionally, this sedan looks more prominent than before and thanks to that we can assume more roomy cabin.

From the information that we got, the upcoming sedan could get subsequent updates that will include better styling and it might get even a new powertrain. If you didn’t know, Mazda has teamed up with Toyota to reduce development costs.

The forthcoming 2023 Mazda 6 is featuring the same Mazda’s Kodo design as the 2017 Vision Coupe concept. This model looks attractive and elegant from every angle. At first glance, we can see that four-door sedan offers muscular proportions that include sharper LED headlights, long hood, axle-to-dash ratio, and short rear deck. Besides, we can see some modifications like a higher roofline and larger daylight opening area.

On the back, the Mazda 6 has Ferrari-inspired appearance with a sloping roofline, chrome quad exhausts and circular LED taillights.

The interior of 2023 Mazda 6 will be highly-crafted. Like before, this model will feature the same layout. However, this time there will be a more spacious cabin. The Mazda 6 sedan holds its own design and it is keeping up easily with other direct rivals in the same class.

The new sedan comes with a touchscreen interface on the dash. Of course, the secondary display is still there and is showing vehicle information ahead of the front passenger. Along with the vast swathes, this model can also be equipped with Nappa leather, heads-up display, ambient lighting, and a Porsche Taycan-like digital instrument cluster.

We do not have much information for this department. The upcoming 2023 Mazda 6 could use the new powertrain according to many gossips. This model might switch to six-cylinder options and a rear-wheel-drive system. Generally, we could expect a few engine options. Most likely the manufacturer will use Skyactiv-X compression-ignition petrol and a Skyactiv-D diesel with a 48-volt mild hybrid.

From what we hard, the most more potent model will provide more than 350 horsepower (261 kW). However, some of the regions might use an updated version Skyactiv-G 2.5-liter inline-four and a Skyactiv-D 2.2-liter twin-turbo inline-four diesel. Both mills will use a rear-wheel system via a new 8-speed automatic transmission.

Unfortunately, although the new 2023 Mazda 6 is not even in a developing stage, don’t expect an official reveal anytime soon. Mazda recently stated that there wouldn’t be any new launches until 2023. So, thanks to this statement we assuming that the upcoming Mazda 6 might be introduced sometime in 2022 as 2023YM. We also can expect at the same time refreshed rivals like Honda Accord, Toyota Camry, Hyundai Sonata, Ford Fusion/Mondeo, and Volkswagen Passat.