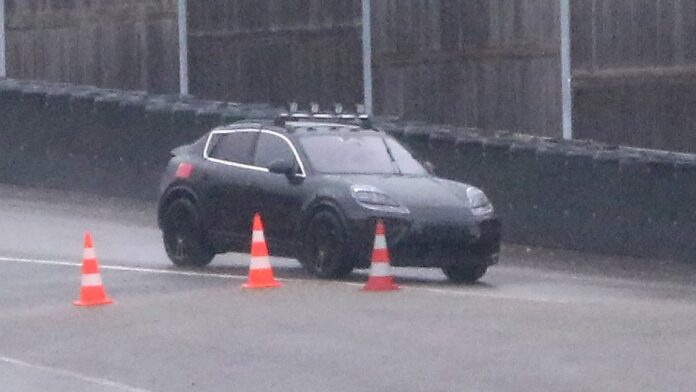 The new 2022 Porsche Macan EV is arriving, and we just got the first photos confirming that claim. Porsche has unintentionally released a new batch of the images, giving us a preview, of how the upcoming model will look like.

The German’s upcoming pure-electric SUV, Porsche Macan EV, will debut sometime next year, becoming the second EV in Porsche’s line-up. As you probably know, the first-ever all-electric model from Porsche is the futuristic Taycan. Therefore, expect the upcoming Macan EV to share plenty of cues with it, and it might use a similar electric system.

In terms of design, the upcoming 2022 Porsche Macan EV spy photos reveal a couple of changes compared to the regular model. As mentioned, the upcoming Macan EV will be the first SUV, that will use the firm’s new Premium Platform Electric called (PPE). Interestingly, this platform is the counterpart of the current Macan’s MLB platform. Compared to the Taycan that uses the J1 platform, the PPE is built on a completely different architecture.

At first glance, the next-generation Macan EV will feature a smoother front bumper and slimmer headlamps than the current Macan. The spy photos also reveal that EV will adopt a more coupe-like silhouette, too. On the other hand, the back of the EV model reveals new taillights system and a single exhaust system on both sides.

Expect the new 2022 Porsche Macan EV to look modern, with plenty of premium materials inside. Porsche manufacturer is one of the best in this department, offering great technology and maximum comfort to all passengers.

Generally, there is little information regarding the interior of the Macan EV at this moment. However, from plenty of gossips, the forthcoming electric SUV will maintain the Taycan model’s DNA. We are hoping that the manufacturer will use the same infotainment system and numerous standard features that can be found in this model.

Unlike the current Macan that uses an MLB platform, Macan EV will be the first one made on a PPE platform. From some reports, it will share pretty much the same technical specifications as the Taycan. That means it will most likely get the same 800V/350kW charging capability. Calculating, it will provide an equal mileage of 300.

Generally, as in the case of the Porsche Taycan, we’re expecting the new Macan EV to be available with a few different power outputs. So, it’s most likely that there will be options to choose short and long-range battery packs. However, at this moment, we are not sure if EV will be offered with either rear or four-wheel-drive system.

As we already stated, the new 2022 Porsche Macan EV will debut sometime next year as the second EV in Porsche’s line-up. Taycan model is the first one that is released as the all-electric, featuring plenty of innovations.

However, with the release of the Macan EV, we can expect even more technology and features. Pricing has not yet been revealed, but everything bellows $70,000 is more than welcome.