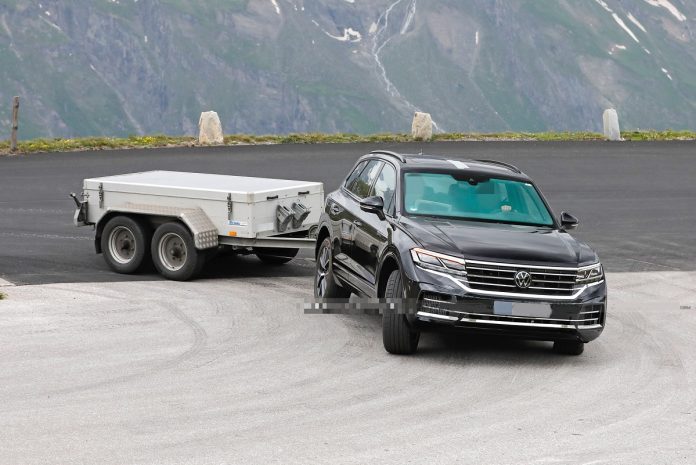 The 2024 Volkswagen Touareg is set to have its mid-life makeover in order to maintain a competitive balance in the market for full-size SUVs. Some photographers were able to catch two prototypes of the redesigned Volkswagen Touareg’s pulling trailers in the Alps.

The prototypes were only lightly disguised. According to the first spy images that have been released, the front end of the vehicle is the primary focus of the subtle design adjustments that are concealed by the ingenious camouflage wrap, which replicates the look of the already available model. Continue reading to learn more about this incredible SUV and its features.

The redesigned 2024 Volkswagen Touareg seems to be on track to get a significant number of noteworthy enhancements. First and foremost, the front bumper of the German SUV will be updated to include a new grille and new intakes joined by a chrome strip. The test vehicles that were spotted in the Alps have the Matrix LED headlights from the current Touareg, but we anticipate the facelifted model will include more contemporary styling.

The rear end has the aggressive R-Line bumper with two exhaust pipes and a full-width reflector atop the noticeable diffuser, but the profile stays the same. Still, the simplicity of the LED taillights’ design gives them a very contemporary appearance.

The inside of the 2024 Volkswagen Touareg will get a comprehensive makeover. Therefore, you may anticipate the cabin to be up to date and to have various cutting-edge innovations. The third-generation Volkswagen Touareg has already been equipped with an Innovision Cockpit that features a digital instrument cluster that measures 12 inches and a touchscreen for the infotainment system that measures 15 inches.

During the facelift, there is a possibility that the software that controls the digital cockup may be updated. In addition to this, we anticipate the introduction of a plethora of innovative safety technologies. So, expect features such as adaptive cruise control, lane-keeping aid, and a semi-autonomous driving mode that Volkswagen refers to as Travel Assist. From information that’s available, we can also expect, for the first time, a new Night Vision system that will detect humans and animals in darkness via a thermal imaging camera.

The new Touareg shares the MLB Evo architecture with the Audi Q7/Q8, Porsche Cayenne/Cayenne Coupe, Bentley Bentayga, and Lamborghini Urus. Since the V8 diesel was phased out in 2020, the current engine range changed. It now has a 3.0-liter V6 TDI diesel, the 3.0-liter V6 TSI petrol, V6 TSI PHEV, and the R PHEV.

The revised lineup will undoubtedly include the electric versions. However, due to upcoming tighter pollution restrictions, the diesel model may be withdrawn from certain regions. In the next few months, we anticipate that further information will become accessible.

It is anticipated that the updated 2024 Volkswagen Touareg will be released somewhere in the early part of 2023. Pricing has not been disclosed as yet, but we anticipate that it will begin at around $50,000. Moreover, it should increase from that point forward. So, expect the new performance-focused R PHEV to be way more expensive.