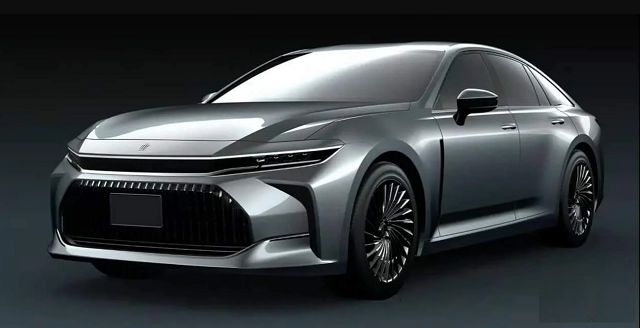 In a world dominated by crossovers, Camry remains one of the rare old-school sedans that still remain on the market. Moreover, this model still marks impressive sales numbers, mostly because of the excellent balance between price and quality. The current generation has been around since 2017 and if we consider the 2021 refresh, as well as the fact that the key rival, Honda Accord, is getting fully redesigned for the next year, it makes perfect sense that many reports suggest a full redesign for the 2024 Toyota Camry.

At this point, not many things are known about the next-generation Camry. Still, we may presume that, considering the popularity of the current model, most of the changes will be evolutionary. We count on a similar overall layout and size but on the other hand, a lot of new things are about to come as well. This refers to different aspects of the vehicle, starting from the powertrain, new tech features etc.

If we can trust rumors, the 2024 Toyota Camry could arrive already in the second half of 2023.

As we’ve just mentioned, the 2024 Toyota Camry is expected to receive a complete overhaul. At this point, the officials are still quiet but if we consider the success of the current generation, we presume that most changes will be evolutionary. One of the things that come to mind is the platform. We count on an updated version of the current TNGA-K architecture, where the updates would bring further improvements regarding ride quality, as well as some new technical solutions regarding hybrid powertrain etc.

All these things will make Camry even better but the overall design approach will remain largely the same. This refers to various aspects, starting from the body style. Of course, we will see the good-old four-door sedan layout and, most likely, dimensions won’t be significantly different compared to the outgoing generation.

Although it’s still early to talk about things like aesthetics but may presume that the new 2024 Toyota Camry will stick closely to the brand’s latest design language. What does this actually mean, it’s hard to tell at this point. We presume that the overall shape and proportions will remain largely the same. We expect to see the same profile, characterized by sleek lines and a sporty overall shape.

On the other hand, both ends should come completely new. We presume that a lot of inspiration could be taken from the recently introduced Toyota Crown. We would see a similarly designed lighting group, though there would be a lot of room left for exclusive details.

The same thing is with interior design. At this point, the best we could say is that the overall seating configuration is about to remain the same. Thanks to the long wheelbase, there is plenty of legroom in both rows, so the Camry accommodates adults with ease.

On the other hand, we count on the all-new dashboard design. Once again, a lot of inspiration could be taken from Crown. New attractive shapes are expected, while we also count on further improvements regarding materials and the overall build quality. Furthermore, we count on lots of new tech and convenience features. Some of the first things that come to mind are the new infotainment system and a larger infotainment screen, along with improved connectivity features.

This is where we could see some pretty interesting novelties. The current generation is available in three variants, with two gasoline and one hybrid powertrain. We presume that the base 2.5-liter inline-four with 202 horsepower could easily remain on offer, as it makes the Camry one of the most affordable vehicles of this size on the market. On the other hand, the current, pretty capable V6 could easily be replaced with the new 2.4-liter turbo-four. With 275 horsepower and 312 pound-feet of torque, it features less power but notably more torque than the V6, which should have a positive effect on driving dynamics.

When it comes to a hybrid powertrain, we presume that the overall setup would remain the same. On the other hand, we could see some upgrades, which would improve fuel economy and bring a little bit more power. Some sources also speculate about the new system, based on a turbo-four, with a six-speed automatic, which powers the new Crown and offers a pretty impressive max output of around 350 horsepower.

We believe that the 2024 Toyota Camry will hit the market sometime in the second half of 2023. The starting price shouldn’t be significantly higher compared to the current model, which is available at around 26.000 dollars.