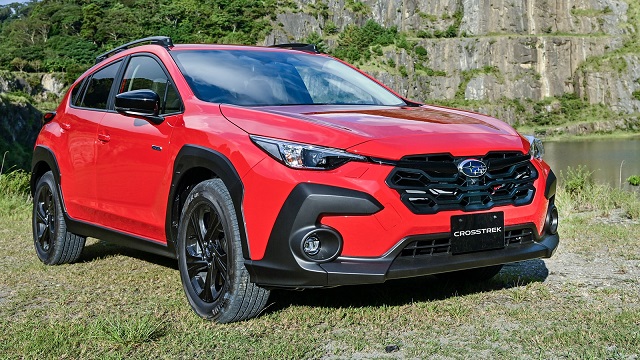 Subaru’s entry-level crossover is about to receive a full redesign. The 2024 Subaru Crosstrek has already been presented and it is expected that the new generation will hit the market in the next year. From what we can see on the presented model, this redesign brings typical Subaru changes, with a focus on subtle improvements, rather than radical changes. That’s why it isn’t easy to tell bigger differences between the new and the old model.

As we’ve just mentioned, the new generation brings mostly subtle changes. There is a slightly updated styling, while the platform remains the same. The cabin design is new and it feels more upscale than before, thanks to new materials and more tech features. Finally, there is the powertrain department, where we expect to see some interesting changes. Some of the units will carry over from the previous generation, while the Japanese manufacturer also prepares some novelties.

The Japanese model brings a completely redesigned 2024 Subaru Crosstrek to the table. The new model will continue to compete in the subcompact crossover segment and considering that the outgoing model is still among the class leaders in many aspects, it’s quite logical that there are no significant changes with this redesign.

For example, the new model rides on the same platform, though there are some modifications on the chassis, which make it more rigid. Of course, the suspension setup has been improved, so we expect some minor changes regarding ride quality, in a positive direction, of course.

Naturally, there is the new styling and the changes are pretty subtle. The new generation features a pretty similar overall shape, with recognizably high ground clearance and massive plastic cladding. On the other hand, there is the new front-end design, with slimmer headlights and a more massive grille.

The cabin also brings subtle changes compared to the previous generation. Just like in other recently introduced Subaru models, one of the most notable changes is the new large touchscreen, which is vertically oriented and makes the cabin look pretty high-tech. The rest of the dashboard brings more attractive shapes and nicer materials, while there is also a new steering wheel, along with the new instrument cluster.

In terms of overall dimensions, the new 2024 Subaru Crosstrek isn’t much different compared to the previous generation. Therefore, we expect to see a pretty similar amount of passenger and cargo space to the outgoing model, which is already among class leaders in this aspect.

The Crosstrek has always been known for its generous offer of safety and driver-assistance features and the new generation will continue in the same way. Of course, many systems will carry over from the previous generation, with small improvements. Also, there are some interesting novelties, such as the new stereo camera unit, which roughly doubles the angle of view compared with previous camera units and also increases the distance, which will significantly improve the work of various safety systems. There is also a new wide-angle mono camera, which enables the recognition of motorcycles and pedestrians at an even wider angle than the new stereo camera when traveling at low speeds, which is important for pre-collision braking.

The upcoming redesign will bring a couple of big changes under the hood. The base 2.0-liter engine will be dropped from the offer. So, the currently-optional 2.5-liter unit will become standard in all models. This engine comes with a max output of 182 horsepower and, of course, it is paired with a CVT. Of course, the company’s legendary all-wheel-drive system is standard in all versions.

The outgoing generation is available with a plug-in hybrid system and the latest reports suggest it will be replaced with a new e-Boxer hybrid system, though details are still unavailable.

Finally, there is a chance to see a new 1.8-liter turbocharged flat-four engine, which is already available in some new Subaru models, though not in North America.

We expect that the 2024 Subaru Crosstrek will arrive in the next year, with a starting price of around 25.000 dollars. Of course, Honda HR-V will remain the key rival, while there are also potential competitors like Hyundai Kona, VW Taos, Chevrolet Trax etc.