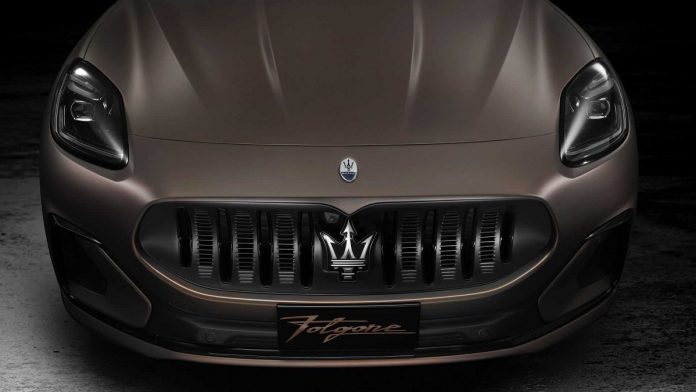 The 2024 Maserati Grecale Folgore is brand’s first-ever all-electric SUV, which is expected to debut in 2023. The new SUV has been recently revealed, and it looks really attractive. It adopts the partially closed-off grille, aero-style wheels, copper accents, and the unique Rame Folgore exterior color.

Although Maserati does not reveal many details about how many electric motors will be available, but we know that it will feature a 105-kWh battery pack and up to 800 Nm (590 lb-ft) of torque. In general, a dual-motor AWD setup is very likely. It is also worth mentioning that the Grecale Folgore uses a modified version of the Giorgio platform, which underpins the standard Grecale and the Alfa Romeo Stelvio models.

Visually, the new 2024 Maserati Grecale Folgore looks exactly like the gas model, but with a few key details that separate this SUV from the electric variant. Unlike the standard version, the Folgore features a grille that is partially closed off and interesting-looking Folgore badges on the fenders.

It also comes with more attractive wheels with a copper color called Rame Folgore. This paint is exclusive to the electric version. We also know that the new Grecale Folgore will ride on a modified version of the Giorgio platform, which also underpins the standard Grecale and many gas models such as the Alfa Romeo Stelvio.

Unfortunately, we don’t have much information regarding the interior of the 2024 Maserati Grecale Folgore. From what we know, the new SUV will be modern and comfortable. It will use recycled fabrics, including a recycled nylon material, which Maserati calls Econyl.

We are also expecting to see many Folgore badges and probably more comfortable seats compared to the standard model. Like every new Grecale the Folgore will include standard leather upholstery, wireless Apple CarPlay/Android Auto smartphone integration, plus Amazon Alexa and Google Assistant compatibility.

Maserati has provided a few juicy specs for its first EV SUV. From the information that’s available, the new 2024 Maserati Grecale Folgore will be all-electric, using a 105.0-kWh battery pack, and we assume there will be at least two electric motors. The manufacturer also revealed that it will produce 590 pound-feet of torque.

Anyway, the company has not yet confirmed the exact battery information and its capacity. For comparison, the Audi Q4 e-tron uses a battery with a capacity of 77.0-kWh. The current Grecale uses a hybrid system that produces up to 325 horsepower.

At the moment, we don’t know the exact price of the forthcoming Maserati Grecale Folgore. The current Grecale starts at $64,995, so we wouldn’t be surprised to see Folgore begin at $75,000.

The all-electric SUV rides on a modified version of the Giorgio platform that underpins the standard Grecale and Alfa Romeo Stelvio models. We’re expecting the new SUV to go on sale sometime next year, likely before summertime.