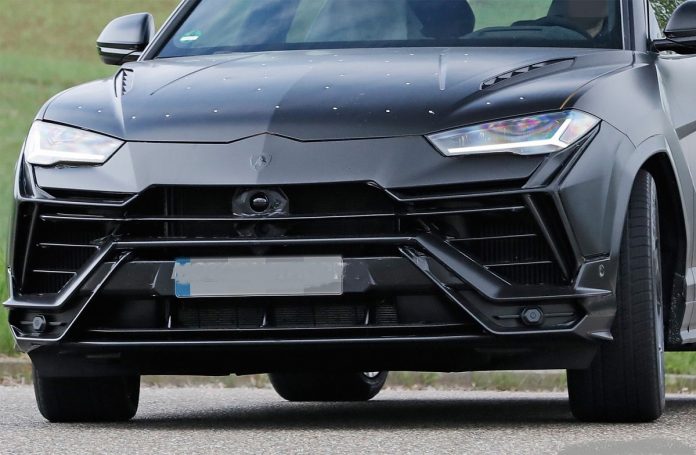 The new spy shots of the 2024 Lamborghini Urus are available, and the prototype wears almost zero camouflage gear. Thanks to that, we have a clear look at the new front fascia that looks more aggressive than before. Despite the ongoing pandemic, Lamborghini managed to sell around 8,405 vehicles last year, while Urus has almost 60% percent of this tally.

Besides exterior upgrades, the forthcoming model will also likely be some tweaks inside including better materials and tech. As for the engine, just like the current model, the new one comes exclusively with a 4.0-liter twin-turbo V-8 that delivers 641 hp.

The new spy shots reveal some tweaks on the upcoming 2024 Lamborghini Urus. The prototype wears almost zero camouflage gear, which allows us to see some changes on the front fascia. It seems that Lamborghini Urus now comes with some additional vents at the outer edges. These vents are known as air curtains, giving more stream airflow around the flanks of the vehicle.

The spied model also comes with a new hood with its own vents for better engine cooling. Anyway, we also managed to see some changes on the back, and the Urus looks much more aggressive. It features attractive taillights with better graphics and a new exhaust system.

Just like the exterior, the interior of the 2024 Lamborghini Urus will get some tweaks. First of all, the jet-fighter design remains, with plenty of faux-suede and carbon-fiber trim. The Urus also offers 22 cubic feet in its cargo area, which drops by 2 cubes when the optional rear bucket seats are installed.

As for technology, the new model comes with a large infotainment system and reconfigurable gauges, the same we saw on Audi models. Along with a fully digital gauge cluster, this SUV also has two touchscreens built into the center stack. Both screens have crisp graphics, supporting Android Auto, Apple CarPlay, SiriusXM, HD Radio, navigation, and a 10-speaker audio system.

Under the hood, the 2024 Lamborghini Urus will likely continue being powered by the same engine. In general, there is no need for changes at all because the 4.0-liter twin-turbo V-8 is one of the wildest machines in the class. This model produces 641-hp and it competes against the 707-hp, Hellcat-powered Jeep Grand Cherokee Trackhawk.

On top of that, it comes with an all-wheel-drive and an eight-speed automatic transmission as standard. In case you didn’t know, the Urus is able to run from 0 to 60 mph in 3.1 seconds. Likewise, this model likes to drink and is EPA estimated 12 mpg in the city and 17 mpg on the highway.

What is the Price of the 2024 Lamborghini Urus?

Even so, it is the best value in the Italian company’s lineup. From the information that’s available, the new and more mighty SUV should go on sale in 2023 as a 2024 model. It will continue its rivalry with the Bentley Bentayga, Range Rover Sport, and Porsche Cayenne.