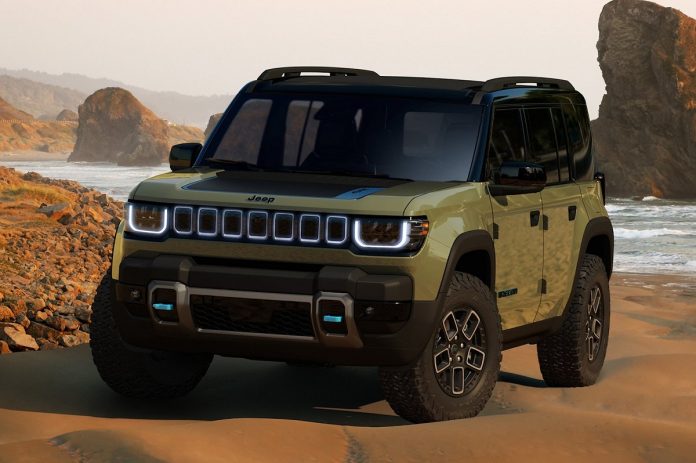 The brand-new 2024 Jeep Recon, which will debut next year, will carry over certain Wrangler traits. The company says that it has “exceptional” approach, departure, and break-over angles, as well as doors and windows that can be taken off.

Unfortunately, Jeep has not revealed the engine specifications or the external measurements of the upcoming SUV. However, they said that the new vehicle will include electronic locking differentials, off-road-rated tires, and underbody protection. The Recon, just like the Wagoneer EV, will be produced in the United States. However, they will also be offered in Europe and other international markets.

The 2024 Jeep Recon was unmistakably influenced by the legendary Wrangler. It features a similar recognizable appearance and presence. With that, we mean, especially on the seven-slot grille that is now lighted.

Similar to a Wrangler, the Recon will include power windows and doors that are detachable. On top of that, a one-touch power roof is also included. The Recon evokes the Wrangler in the rugged outdoors by including under-body protection, blue tow hooks, and tough off-road tires. Press pictures also reveal a distinctive black hood with a blue frame. As you can see, the new SUV will be very modifiable, much like previous Jeeps.

Although we haven’t yet seen official interior images, the Jeep Recon’s cabin seems to be strong, practical, and roomy. On top of that, this model will seat five people. Rear passengers should have greater space if the floor is flat.

The 2024 Jeep Recon will solely have electric motors. We anticipate that the coming SUV, similar to the Jeep Wrangler 4xe, will be available with either a single or a twin motor combination for the e4WD system. Additionally, it will be supported by an STLA-large platform.

So, we expect more than 600 horsepower from the combination of the two engines. On the other hand, the single motor will be capable of producing closer to 400 horsepower. The new SUV will also have the capability to deliver 400 miles, while 200 miles are expected per 10 minutes of charging. We expect to learn more about its specs in the next few months.

The brand’s first electric vehicles (EVs) for the American market are the 2024 Jeep Recon and Wagoneer S. Both models will be introduced later this year, while sales should begin in the second half of 2023. As we said, the Jeep Recon will be an all-electric SUV, featuring the Wrangler’s boxy shape and rear-mounted spare tire. We’d anticipate a targeted range of around 400 miles while driving on the road.

Depending on options, the price of the 2024 Jeep Recon is probably going to range between $55,000 and $60,000. However, different trims and engine choices will also cause the price to increase.