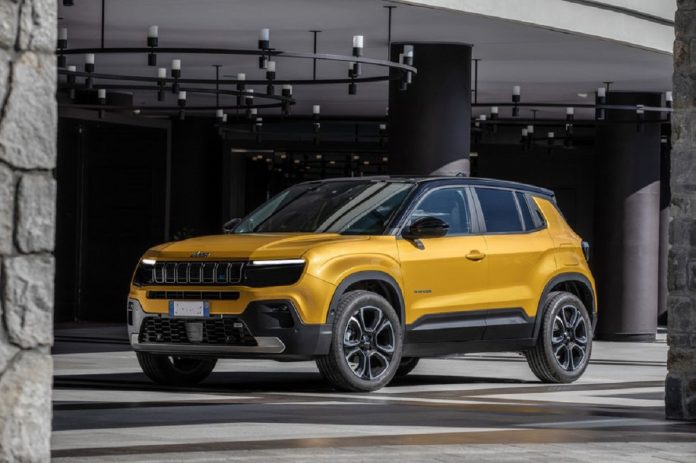 At the Paris Motor Show, the first fully electric vehicle to be produced by an American manufacturer, the 2024 Jeep Avenger, was shown to the public for the first time. This event served as the starting point for Jeep’s shift towards the all-electric era. In the second half of the year 2025, Jeep plans to release four models of fully electric automobiles, the first of which is the Jeep Avenger.

The Avenger is the first step that Jeep is taking toward achieving its ultimate objective of becoming the industry standard for zero-emission sport utility vehicles (SUVs). The CEO of the Jeep company said that the Avenger “packs the Jeep DNA into a tiny SUV.” The Avenger also has style, technology that has been perfected, and a lot of space for storage.

The all-new 2024 Jeep Avenger keeps the brand’s signature look, which has been simplified to make an attractive SUV body. The most recognizable part of the Jeep brand, the seven-slot grille, is on the front of the Avenger, but the brand symbol is now a horizontal pattern instead of a vertical one. The Jeep Avenger has a powerful and robust appearance because of its broad fenders and bulging bumpers, which call attention to the off-road capabilities of the vehicle. The small SUV is 16 centimeters shorter than the Renegade, but it still has those well-known “Jeep” traits and doesn’t lose any of its potential.

From the side, the standard trapezoidal wheel arches steal the show, but the Jeep’s highlight is its big 18-inch wheels. The Jeep Avenger’s aerodynamic profile, thanks to smooth curves, makes the car easier to drive at higher speeds.

The interior of the Avenger has a modern dashboard and a color panel that the owner can customize. Additionally, there is a large 10.25-inch touchscreen that is located in the middle and is visible to both the driver and the passenger. The infotainment system in the Jeep works with both Android Auto and CarPlay, so you can mirror your phone on the big screen.

Leather seat inserts give the interior a feeling of luxury and come with a massaging feature that will come in handy on longer trips. The new model offers a variety of driver-assist technologies. It includes technologies like Lane Centering, Automatic Emergency Braking, Traffic Sign Recognition, and Cruise Control to make driving smoother and more pleasurable.

According to what we know, the new 2024 Jeep Avenger will come with the latest Stellantis battery. Jeep just recently said that the car can drive up to 342 miles on a single charge in certain situations.

When using a 100kW connection, the Avenger’s battery has an impressively high rate of efficiency, which lets it reach 60 percent charge in only 24 minutes. Thanks to a strong electric motor, this model produces 115 horsepower and 192 pound-feet of torque.

It is true that the 2024 Jeep Avenger has been created specifically for the market in Europe. But this is bad news for the United States because it means the country won’t be able to take advantage of the car’s great looks and impressive abilities. But who knows? Jeep might find that the American market needs a truly beautiful subcompact sport utility vehicle one day. The new model will go sale sometime in the following year, with a starting price of around $25,000.