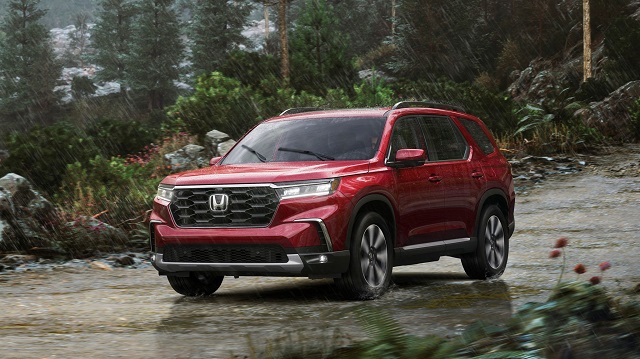 The new generation of Honda’s mid-size crossover is on the way and from what we can see, it brings a lot of improvements. The outgoing model is great in so many ways but it was always criticized for underwhelming off-road performance, even by the standards of crossovers. This will change, according to the Japanese manufacturer, as the new model is about to bring a much tougher stance, with a more rugged design and all kinds of available off-road features. According to the latest reports, the 2024 Honda Pilot will go on sale in 2023.

The new generation will bring a completely new styling, as well as a nicer cabin layout. Although a lot of mechanics will still be shared with the Odyssey, the chassis and suspension setup will be significantly modified, while the new Trailsport trim will ensure pretty respectable off-road performance. Under the hood, the new model will continue with a well-known V6, which will get a slight power increase.

When it comes to the overall design, the 2024 Honda Pilot will continue to ride on the same platform as Odyssey. However, we are about to see a significantly different design approach. Just one look at the new styling and you can easily conclude that the new model will be more rugged. The new SUV looks more massive and more aggressive, particularly at the front. The most prominent are new headlights, as well as a massive grille with a modern pattern.

The new model doesn’t just look bigger but also features bigger dimensions. Just like the Acura MDX, the new Pilot gains 2.5 inches in wheelbase, which provides more space on the inside, and also makes the new SUV look sportier, as the overhangs are shorter now.

As we’ve just mentioned, Honda did a lot to improve the Pilot’s off-road performance. Moreover, there is also a new trim called Trailsport, which brings several extra off-road features. Some of the highlights are a 1.0-inch suspension lift, all-terrain tires, hill descent control and an upgraded AWD system with Trail mode.

Of course, big changes are coming on the inside as well. The 2024 Honda Pilot brings a completely new dashboard design, which takes a bit of inspiration from the smaller CR-V but also brings a bolder and more rugged design. The materials look very nice, and there is a lot of attention to detail. Also, there is a full load of new tech features, starting from a 7-inch digital instrument cluster and the new infotainment system that works way better than before. It comes with a standard 9.0-inch touchscreen, while a bigger 10.2-inch unit is available. Also, you may count on other modern tech features, such as wireless Android Auto and Apple CarPlay, as well as the optional 12-speaker premium audio system.

The Pilot has always been spacious on the inside and we have no doubt that the new generation will continue in the same way. Moreover, the aforementioned wheelbase increase should provide extra legroom, particularly in the third row. All versions will come with three rows and all but the base model will be available with second-row captain’s chairs. The outgoing model already features one of the largest cargo areas in the segment, so we expect nothing less from the new model.

When it comes to the powertrain, the well-known and proven 3.5-liter V6 will carry on. However, the new versions will bring a slight power boost, so the max output will go up to 285 horsepower, which is 5 horsepower more compared to the outgoing model. More importantly, the new model will get a new transmission. Instead of the current 9-speed unit, the new model will get a 10-speed automatic transmission, the same one as in the new MDX. Base models will feature front-wheel drive, while AWD will be available.

Some sources also speculate about powertrain upgrades. The officials are still quiet but we can hear rumors that suggest a performance-oriented model, which could come with the turbocharged 3.0-liter V6, which already powers the MDX Type S. Some sources also speculate about electrification, where we could see a hybrid version sometime in the future.