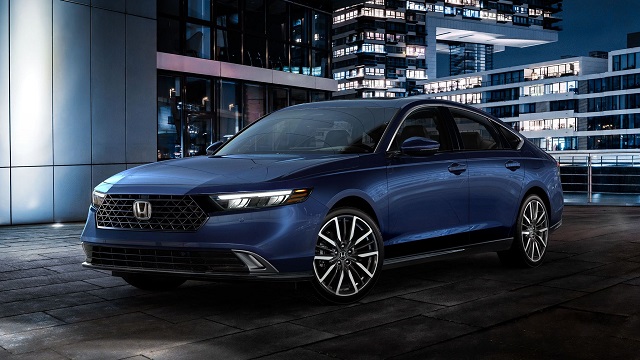 The legendary sedan is still surviving in North America, despite that market is mostly about crossovers and SUVs these days. The Accord remains one of the few remaining mid-size sedans and it’s great to hear that the next generation is on the way. The 11th iteration will debut for the 2023 model year, so it’s easy to conclude that the 2024 Honda Accord will probably feature no significant changes. Instead, we expect to see the same overall design, though some novelties are still possible, particularly under the hood.

You may count on a design that doesn’t bring any radical changes compared to the previous generation. Of course, the styling is new but the actual overall layout isn’t much different. We are still talking about the familiar sedan formula, which offers great ride quality, in a combination with a comfortable and well-assembled cabin, lots of equipment and attractive aesthetics.

We expect that the 2024 Honda Accord will arrive sometime in the second half of 2023.

Design-wise, it’s hard to believe that the 2024 Honda Accord, which will represent the second production year of the new generation, could bring more important changes. Instead, we expect to see the same overall design, which has brought several interesting upgrades compared to the previous generation. The new model is slightly bigger and more spacious, while there is also a completely new styling.

The new styling brings mostly evolutionary changes. The overall shape is practically the same, while the main differences are at the front, where you can notice sharper headlights, a bigger grille and a more aggressive overall look. The rear end appears to be more elegant than before, with taillights that include new stripes that go all away to the center, to Honda’s recognizable badge on the tailgate.

Of course, this redesign has also brought a completely new interior, which takes a lot of inspiration from the smaller Civic and CR-V models. The dashboard is designed in the same aesthetical approach as the aforementioned models but feels a little bit more upscale, due to the use of nicer materials. Also, the sound insulation is a little bit better, while there are more standard and available tech features.

The front seats are massive and supportive, with great overall comfort. Furthermore, we really like the driving position, though that’s something we used from the Japanese manufacturer. The rear seats are also very spacious and comfortable. There is plenty of headroom, while taller passengers shouldn’t struggle with headroom either. The cargo area offers 16.7 cubic feet, which is pretty good for the segment.

Novelties in this aspect are always possible but we are pretty sure that most things will remain the same. Therefore, base models will come standard with a 7.0-inch infotainment screen, while a bigger 12.3-inch unit is available. The list of standard equipment will also include a 10.2-inch digital instrument cluster, as well as Android Auto and Apple CarPlay. With a bigger touchscreen, these smartphone integration features are wireless. Among available equipment, expect also to find goodies like wireless charging, a head-up display, 12-speaker Bose audio system and more.

We also count on a long list of standard safety features. Some of the highlights should be goodies like automatic emergency braking, pedestrian detection, lane departure warning, lane keep assist, adaptive cruise control and many more.

The powertrain department could come with some updates, as the initial 2023 model wasn’t offered with a more capable variant. For the initial launch, the Japanese manufacturer prepared just a couple of versions, where the base model comes with a familiar 1.5-liter turbo-four, which puts out 192 horsepower and comes with a CVT. Also, there is a new hybrid system, based on a familiar 2.0-liter four-cylinder engine and two electric motors, for a combined output of 204 horsepower. This unit also comes coupled with a CVT.

Many believe that the company could bring back the 2.0-liter turbo-four for the next year. In the previous generation, this version was good for about 252 horsepower and was paired with a 10-speed automatic transmission.

2024 Honda Accord Release Date and Price

We believe that the 2024 Honda Accord will arrive sometime in the last quarter of 2023, with a starting price of around 28.000 dollars.