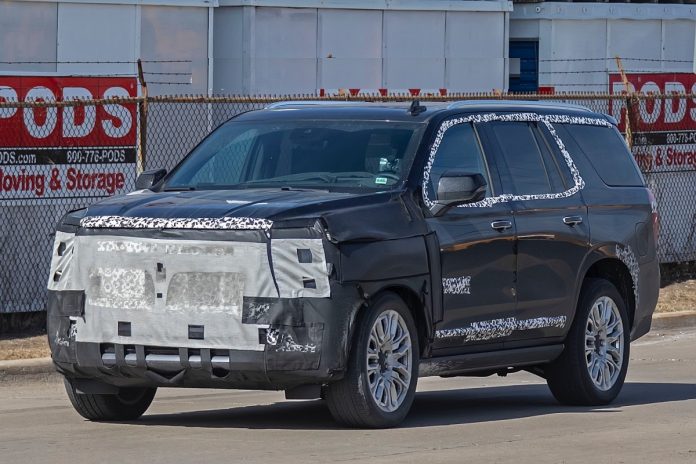 General Motors will introduce next year the 2024 GMC Yukon, which is a six-generation model of the company’s full-size SUV. The first shots of a prototype of the vehicle being tested in public have been released, and these pictures show the SUV wearing heavy camouflage. However, we saw some changes, and the redesigned Yukon will include a new form for the roof fin antenna.

Also, other updates are a new style for the front and rear fascia, as well as the potential introduction of new autonomous driving features via the GM Ultra Cruise system. In 95 percent of driving scenarios, this system will outperform the current GM Super Cruise system in terms of capabilities as well as true hands-free driving.

The 2024 GMC Yukon looks way more attractive than before, despite its imposing dimensions. It features an elegant design that pulls off the appearance of being both tough and high-end. While the Denali models have a more premium appearance, the AT4 level has an off-road attitude thanks to a redesigned front fascia that provides a better approach angle.

The new Denali Ultimate trim is the most expensive variant that’s equipped with distinctive aesthetic elements like highlights finished in a dark “Vader Chrome” and specialized wheels measuring 22 inches in diameter. It’s also noteworthy, that this model is offered with a choice between two different wheelbase lengths, much like the Ford Expedition. There is the Yukon, which has a wheelbase of the usual length, and there is also the Yukon XL, which has a wheelbase that is 15 inches longer.

The 2024 GMC Yukon’s roomy interior features three rows of seats, offering plenty of legroom and cargo room. If this is not enough for you, the manufacturer also offers a long-wheelbase XL model, which provides more interior space. The more seats you fold down, the more cargo capacity you’ll have.

Seating for up to eight individuals is typical in the Yukon. That number might increase to nine if you select the front bench seat option, or it could decrease to seven if you select the captain’s chairs in the second row. The infotainment system’s 10.2-inch screen is standard, just like wireless support for both Apple CarPlay and Android Auto. There is also a digital gauge cluster with a 12-inch screen, SiriusXM radio reception, and six USB ports.

Every Yukon comes equipped with the GMC Pro Safety suite as standard safety technology. This suite has a long list of features like lane-keeping assist and lane-departure warning, automatic high beams with IntelliBeam, forward collision alert, a following-distance indicator, and automatic emergency braking with pedestrian detection.

The engine that comes standard with the new 2024 GMC Yukon is a proven 5.3-liter V8 that generates 355 horsepower as well as 383 pound-feet of torque.

The AT4, on the other hand, is available with a more powerful 6.2-liter V8, which comes standard in the Denali, the most expensive trim level. When using premium fuel with 91 octane, the output of this model is 420 horsepower, and it has 460 lb-ft of torque. Lastly, there is an optional diesel inline-six engine that generates 277 horsepower and 460 pound-feet of torque. Unlike other versions, this one comes with improved efficiency. All models use a 10-speed automatic gearbox and rear-wheel drive (RWD), with the exception of the AT4, which offers 4-wheel drive (4WD) as a standard transmission.

The base 2024 GMC Yukon, which comes with a rear-drive, has a manufacturer’s retail price (MSRP) of $51,500. This price does not include the destination fee. The Denali XL with four-wheel drive starts at $75,200, and with some extras, the final price might be close to $82,000.

The Chevrolet Tahoe is in the same line as the Toyota Sequoia and the Nissan Armada. On the other hand, the Ford Expedition begins at $53,000 for its base price. Based on current information, the new model will go on sale sometime next year, likely in the second half.