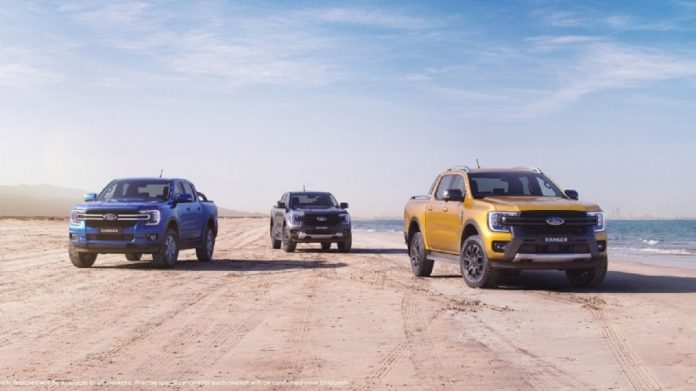 The redesigned version of the 2024 Ford Ranger has been officially confirmed. As far as we know, the next gen model will adopt bolder front-end styling, the same we saw on the recently introduced F-150. Also, there will be two distinct body styles available including four-door crew cab and an extended cab model with two rear half-doors.

We also expect the cabin to receive a makeover, featuring a bigger, vertically-oriented infotainment system similar to what we saw in the current Edge model. Ford has said it will offer the next-generation Ranger with a turbodiesel V6, but we expect the turbocharged 2.3-liter four-cylinder engine, as well as a hybrid powertrain.

From information that we got, the forthcoming 2024 Ford Ranger will look closer to the F-150 model. The next-gen model will basically adopt the same bold front-end styling. However, design will vary, and buyers must decide which cab they want.

The SuperCab comes with a 6-foot bed, while the SuperCrew has a 5-foot bed. Both versions are dimensionally the same with 210.8 inches in length and a maximum payload of 1,860 pounds. The XL trim, which is the base, has steel bumpers finished in black, as well as steel wheels. The Tremor package is the favorite because it adds skid plates, slightly raised ride height, hoop steps, tow hooks, and black grille mesh. For those that are looking for the best off-roader, the Ford Ranger Raptor is the real deal.

Inside, the 2024 Ford Ranger is expected to receive a more modern look compared to its predecessor. As on many modern trucks, the various controls and buttons have been digitized. Ford will reportedly add more quality materials and digital gauge display with better resolution, textured dashboard trim, and it will keep honey-comb patterned air vents.

A large 10.1-inch infotainment display is standard, but buyers can upgrade to an even bigger, vertically-oriented 12.1-inch screen. Both comes with the latest Ford’s Sync 4 interface that supports Apple CarPlay and Android Auto as the in-dash navigation.

As we said, Ford said that the next-gen Ranger will come with a potent turbodiesel V6 engine. However, we also think that they will continue to offer the current turbocharged 2.3-liter four-cylinder. This engine is capable of producing 270 horsepower and 310 lb-ft of torque. A 10-speed automatic transmission comes as standard, sending drive to the rear wheels (RWD).

However, as before, all four is possible if the optional 4-wheel drive (4WD) system is installed. There are also rumors about hybrid and PHEV models as well, but we don’t know exact figures at the moment. The current model can tow up to 7500 pounds, which is near the top of its class for mid-size pickups. We expect the new model to offer probably similar capability or even better.

Filled this model with more options, the price could end up closer to $47k. For comparison, in the same class, the Toyota Tacoma costs $27.5k, the Chevy Colorado around $28k, while the GMC Canyon is $28k. We don’t think the 2024 Ford Ranger will appear in the second half of 2023, but toward the end of the year it might.