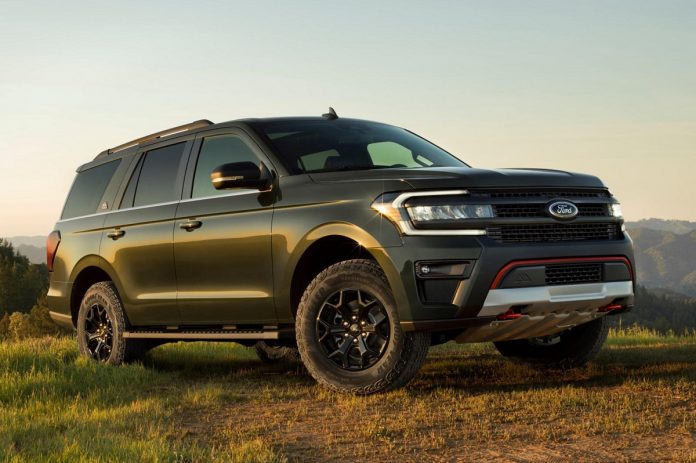 The 2024 Ford Expedition is an upcoming family hauler with three spacious rows of seats. According to many reports, the new SUV will receive some mid-cycle upgrades next year. In case you didn’t know, the Expedition was redesigned last year, featuring freshened styling, and the new Timberline and Stealth trim. Also, it received a big tech update, including the larger infotainment and hands-free highway driving system. For that reason, we expect the new SUV to come as a carryover model without significant changes.

The V6 engine should remain also the same, and expect great truck-like capabilities with a maximum towing capacity of 9,300 pounds.

Is Ford Going to Redesign the Expedition?

As far as we know, the changes for this year’s model will be visible mostly at the front end. In general, don’t expect drastic upgrades, just some tweaks on the grille and headlights. The same will be the case with the Max variant, which has a longer overall length. This model measures 221.9 inches, compared with 210 inches.

Every Expedition comes as standard with roof rails, running boards, and a tailgate with a separate-opening glass section. On top of that, the manufacturer offers a wide range of alloy wheels ranging from 18 to 22 inches.

The 2024 Ford Expedition is one of the rarest SUVs that offers a spacious cabin with the highest number of eight seats. However, if you add captain’s chairs, it will reduce seats to seven. Legroom for the second row is 42.6, while the third offers 40.9 inches respectively. It is also worth noting a Max model as well, which provides extra length and more cargo space. This variant offers 36 cubic feet behind the third row, compared with 20.9 in the regular version. On top of that, you can expand it to 121.5 cubic feet (Max) or 104.6 (regular) with folded rows.

The base model comes with cloth upholstery, and it features a new large infotainment touchscreen that’s optional. The infotainment display measures 15.5 inches on the diagonal, and it stands vertically. Compared to other models, the display is large as of a Tesla model.

Under the hood, the 2024 Ford Expedition continues to use a twin-turbocharged 3.5-liter V6, which makes a perfectly respectable 375 horsepower. However, with the top trims, this unit will develop more power. For example, going for the Platinum trim, you’ll get a 400 horsepower, while the Timberline and Limited Stealth Performance variants are able to produce 440 horsepower and 510 lb-ft of torque.

Rear-wheel drive is the default setup, while 4-wheel drive comes as an option, or standard with the Timberline variant. It is worth mentioning that Ford used a smooth 10-speed automatic transmission across the board.

How Much Will the 2024 Ford Expedition Cost?

The 2024 Ford Expedition is expected to cost slightly higher than before. The current Expedition LX trim, starts at $51,080, while the Platinum trim is $76,765. The main competition in the same class is the Chevrolet Tahoe, starting at $50K, and Chevy Suburban at $52.4K.

The new GMC Yukon is a way better option, but is slightly pricier, from $51.6K. At about $67K, you can get a Timberline version, which is in the same ballpark as the Jeep Wagoneer.  The 2024MY will officially hit the dealerships next summer.