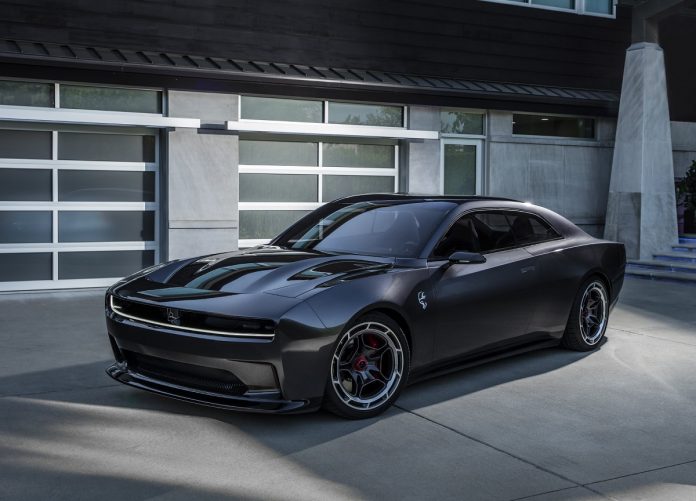 The 2024 Dodge Charger concept, initially seen in its fast Daytona SRT trim, is the clearest sign yet that electric cars are taking over. One of the most powerful muscle vehicles could be electrified, which is a significant endeavor. The next big electric vehicle platform from Stellantis, which is expected to have a range of up to 500 miles, will likely support the next-generation of Dodge Charger.

Of course, a lower range estimate is likely to occur if the performance is turned up to Hellcat levels. In relation to that, while Dodge hasn’t provided much information on the Charger’s powertrain, we can plainly see the vehicle performing a four-wheel burnout in a teaser video for the Daytona SRT model.

The 2024 Dodge Charger Daytona looks aggressive, featuring a new front spoiler, which Dodge refers to as the “R-Wing.” Additionally, it has some of the typical blunt-end features you anticipate seeing when a Dodge appears in your rearview mirror. It keeps the vehicle as aerodynamic as most contemporary EVs, though.

For reasons that no one seems to remember, Dodge revived a historical triangular insignia from the 1970s known as the Fratzog for the core of the R-Wing. The difficult part came first. From the front to the back, it unmistakably resembles the Challengers and Chargers of Dodge’s past.

Modern technology and vintage design elements are highlights of the 2024 Dodge Charger. The inside of the Charger Daytona SRT concept car oblong digital gauge display that looks to have a small bend to it and an infotainment touchscreen with a trapezoidal form in the middle of the dashboard.

The next-generation Charger will undoubtedly feature the most recent version of Stellantis’s Uconnect infotainment system. It will also include well-liked features like wireless Apple CarPlay and Android Auto connectivity, on-board Wi-Fi, and over-the-air update capability, and much more.

We know the Daytona SRT concept employs a revolutionary all-wheel drive 800-volt architecture that the firm has named Banshee. Dodge hasn’t said how many motors will power the different trims of the new Charger, or how much total horsepower they’ll put out. We also know that the demonstration car employs a multi-speed gearbox rather than the normal EV direct-drive system.

This is not a novel idea, considering that the Porsche Taycan also has a comparable system that increase performance and range at greater speeds. Under strong acceleration, it also gives the driver the impression of a gear shift.

When the next-generation 2024 Dodge Charger goes on sale next year, it will be a whole new car for the Dodge portfolio. From what we know, the new Charger will cost more than the current gasoline-powered variants.

There will probably be a number of trims available for the 2024 Charger, including performance variants with the R/T and SRT moniker. Many believe that the base SXT model will start at $60,000, while the Daytona SRT will be around $95,000. When we get additional information, we’ll update this article.