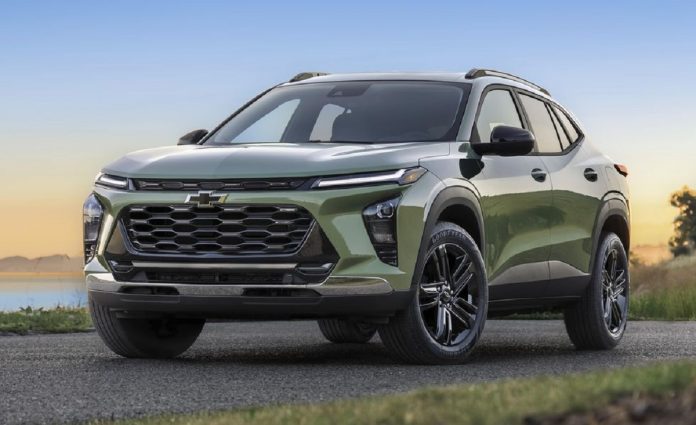 The new 2024 Chevrolet Trax is back and is still an affordable people mover, starting at only $21,495 for the basic variant. Chevy says the next generation of SUVs will be bigger and have more features than you can think of.

Even though it has a new chassis and engine, the Trax is still one of Chevrolet’s entry-level cars. The new Trax, which has the same foundation as the revived Trailblazer, is targeted at consumers on a tight budget who want a bigger crossover than the Trailblazer. The next Trax will reportedly have a new 1.2-liter turbocharged I3 engine instead of the old 1.4-liter four-cylinder engine.

In the past, the Trax was smaller than the Trailblazer. However, the model for the 2024 year is surprisingly larger than the Trailblazer. The old Trax was 167.6 inches long, while the new one is now 11 inches longer, with a length of 173.5 inches. The design has also been better. The Trax’s famous grille is now surrounded by sleek horizontal lines that show off the car’s width and LED lights that look like those on the Blazer. Chevy’s recognizable high-eye LED daytime running lights make the Trax more visible at any time of day or night. Depending on the model, each trim has a different look, like a different grille and wheels.

For example, the LS and LT offer contemporary styling. The LT has 17-inch machined aluminum wheels as standard, while the LS has 17-inch steel wheels. The sportiest style of the Trax is seen in the RS model. This version makes this SUV sportier thanks to additional exterior trim features. It includes a unique grille with an inlaid RS badge. There is also an 18-inch machine-faced aluminum wheel standard on the 1RS grade, while 19-inch machine-faced aluminum wheels are standard on the 2RS grade. The new ACTIV trims are the best option. This one has an aggressive rear skid plate and a monochromatic style with titanium chrome accents. Additionally, it sports striking 18-inch black wheels.

The 2024 Chevrolet Trax has a lot of high-quality materials and new technology inside. The LS and 1RS trims come with an 8-inch media screen on the dashboard, while more expensive Trax models come with an 11-inch screen and an 8-inch digital driver information cluster.

The Chevy engineers took advantage of the additional length by extending the wheelbase of the Trax by almost 6 inches over the previous design. With a larger wheelbase, the Trax should be more stable while traveling at high speeds. Because it is bigger, it can hold more people and more things. The second-row passengers get an extra 3 inches of legroom, and there is 12% more space for cargo.

Powertrain Specifications for the 2024 Chevrolet Trax

The new 2024 Chevrolet Trax has a 1.2-liter turbocharged inline-three engine instead of the older 1.4-liter four-cylinder engine. With the six-speed automatic transmission that comes with the Trax trim level, this 1.2-liter three-cylinder engine sends 137 horsepower and 162 pound-feet of torque to the front wheels.

That is much less power than the current generation of the Trax, which has 155 horsepower and 177 pound-feet of torque. The answer to why the Trailblazer didn’t have a continuously variable transmission (CVT) or an all-wheel-drive system is that it would have cost too much.

Chevrolet is planning to offer the basic model of the LS for $21,495, which is $1,000 less than the price of the current variant. Interestingly, the costliest version of the Trax is the Activ trim, which is around $25,000.

In general, we advise going with the Active trim level since it includes everything that you could possibly need. According to Chevrolet, they will start to become available at dealerships somewhere in the spring of 2023 at the earliest.