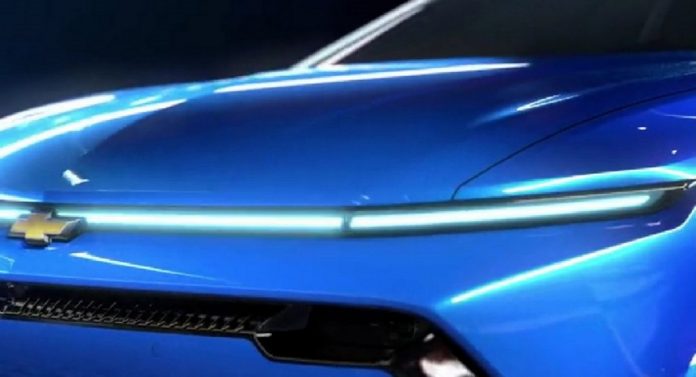 The forthcoming 2024 Chevrolet Equinox EV has been teased, and we must admit, it looks really attractive. It shares many cues with the most selling SUV, the Chevy Blazer. In general, it features the same lines and the most similar front look. However, unlike the Blazer model, the Equinox EV will use a new Ultium platform that is also used on the Cadillac Lyriq.

Interestingly, the interior of the upcoming Equinox will be completely new as well, and in some presentation videos, the manufacturer showed a floating center console that has a generous space underneath it. Last year, the company said that the Chevrolet Equinox EV will be revealed in early fall 2022 before entering production in 2023.

Although it wears the Equinox nameplate, the 2024 Chevrolet Equinox EV shares the same body language as the Blazer SUV. In general, this is a great move from the manufacturer, because it will lure more buyers. It also rides on a new Ultium platform, which is also used on the Cadillac Lyriq model.

The Equinox EV’s exterior styling is attractive and it blends many futuristic touches. Unlike the previous Equinox, the forthcoming EV model features an attractive headlight that starches all the way beneath the hood and a more eye-catchy grille.

Few details are available regarding the interior of the 2024 Chevrolet Equinox EV. In general, the manufacturer recently released a teased video showing the interior of the upcoming SUV. So, we notice the same digital dashboard similar to that of the Silverado EV. However, styling themes are new and the Equinox mirrors the recently introduced Bolt EV hatchback and Bolt EUV crossover.

We also saw the new floating center console that has a generous space underneath it. As for the front passenger space, it looks similar to the current Equinox. Unfortunately, we’ll have to wait a little more to find out more details about the new SUV.

As we said, unlike the Blazer model, the new Chevrolet Equinox EV will use a new Ultium platform. Also, it should come with the same electric motor setup as the Cadillac Lyriq. The mentioned model is using a single permanent magnet electric motor and rear-wheel drive.

Cadillac claims that thanks to this setup, the new Lyriq can produce an output of 340 horsepower and 325 lb-ft of torque. The maximum range is around 300 miles. We also expect an RS variant that could use a dual setup, producing 500 horsepower using the all-wheel drive as standard.

Chevrolet recently reveal that the new Equinox will be available in LT and RS trim levels. Anyway, Chevy could expand the lineup adding a top-level Premier trim closer to the on-sale date. Pricing isn’t official, but we’re expecting it to start at around $30,000 for the model with standard equipment.