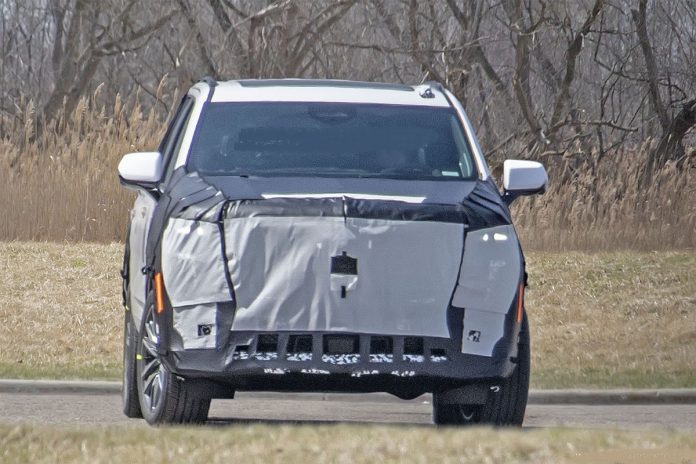 The new 2024 Cadillac Escalade has been spied recently with minor upgrades over its predecessor. Judging by the first photos, the new full-size body-on-frame luxury SUV will get some small tweaks, like a new grille pattern and a revised front fascia. In general, the design of the forthcoming model will be closer to the design of the recently introduced Escalade-V.

It isn’t clear yet what will happen in the powertrain department. From unofficial information, there will be two options to choose from. The first base engine will consist of a 6.2-liter V-8 engine producing 420-hp, while the next engine is a 3.0-liter turbodiesel inline-6 capable of developing 277 horses. Overall, you can also get a Escalade-V, which should borrow the same engine from the CT5-V Blackwing model.

The prototype of the 2024 Cadillac Escalade comes with sharp styling, and it’s more refinement than the previous generation. As the recently introduced Escalade-V performance model, the Cadillac Escalade features the same treatment.

The prototype images reveal a minor tweak, a new grille pattern, and a revised front fascia. For those who may not know, the Escalade has two wheelbases. The standard Escalade is the same size as the Chevrolet Tahoe, while the long-wheelbase Escalade ESV is similar to the Chevy Suburban.

Inside, we don’t expect any changes at all because the interior was refreshed totally last time. So, the new 2024 Cadillac Escalade will come with the same modern cabin that offers plenty of seating space in all three rows. The base trim includes simulated leather seats, while genuine leather is available on upper trims. As for seating, the Escalade is a real family SUV. It has enough room for seven with the second-row captain’s chairs, but you can also get a bench second row, which will increase the seating capacity to eight.

The standard 38-inch OLED display looks stunning, and it’s more user-friendly than any other in class. We also expect the new model to come standard with wireless Android Auto and Apple CarPlay.

Under the hood, the 2024 Cadillac Escalade from many rumors could use the same engines as the current one. The current model is available with two engine options, on which base one is powered by a 6.2-liter V-8 engine producing 420-hp. The next engine is a 3.0-liter turbodiesel inline-6 capable of developing 277 horses.

We must mention that diesel is more fuel-efficient than the V8. Both engines come as standard with a 10-speed automatic transmission. In general, this transmission is one of the favorite because of quick and smooth shifting.

How Much Will the 2024 Escalade Cost?

The refreshed 2024 Cadillac Escalade has finally been spied testing with a way more attractive design. As we said, the forthcoming SUV gains the same treatment as the Escalade V model, and we can expect it to debut later, late this year or early next `likely. However, we don’t expect a significant jump compared to its predecessor. The current Escalade has a starting MSRP of $76,300 for the Luxury 2WD model.

Going for the long-wheelbase ESV model, buyers must pay little more than $79,000. The Premium Luxury is also available, and it costs $84,895, while the Sport model is $87,600. Spot Platinum and Premium Luxury Platinum trims are the most expensive and both start at $101,595. As you may notice, the pricing of the Cadillac Escalade is in line with the Lincoln Navigator, BMW X7, and Mercedes-Benz GLS-Class.