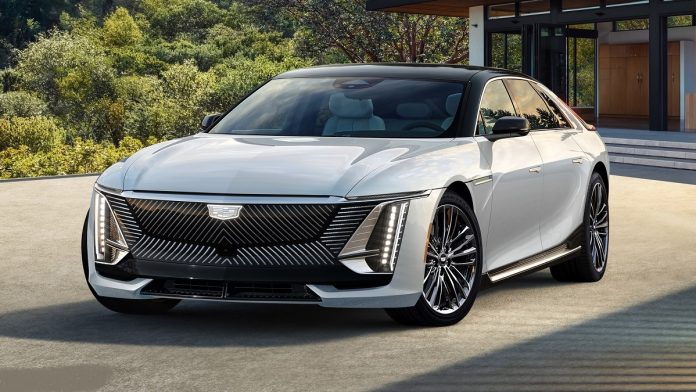 The new all-electric flagship sedan, the 2024 Cadillac Celestiq, will reportedly hit the market next year. In case you didn’t know, this model shares a family resemblance with the Lyriq SUV. It has attractive lines, a sweeping roof, and plenty of high-tech offerings. The cabin looks really unique thanks to the bright red leather upholstery, and the huge 55-inch digital dashboard.

Unfortunately, Cadillac hasn’t released any information so far about the Celestiq’s powertrain, but we can expect the new flagship sedan to be offered with both all-wheel drive and four-wheel steering. Nevertheless, the upcoming model will use two electric motors, one per axle, providing similar accelerative performance as the Tesla Model S and the Porsche Taycan. Without further ado, read more information below.

The exterior styling of the 2024 Cadillac Celestiq is one of the best we’ve seen on a sedan. Generally speaking, it looks like nothing else on the road. The ultra-luxury Celestiq EV took inspiration from several periods of the Cadillac’s history. It dominates on the front with an attractive grille and eye-catching headlights.

In general, its front end looks similar to one of the Cadillac Lyriq models. Anyway, dominance continues in the rear, where the taillights are distinctive and will undoubtedly turn heads.

Starting with cabin design, it will be very futuristic. The Celestiq’s interior is a technological powerhouse that offers comfort for up to four occupants. Most of the luxury inside brings an infotainment 55.0-inch touchscreen that scratches the entire length of the car’s dashboard.

On top of that, even the rear-seat occupants can enjoy their own large displays. Cadillac hasn’t given specifics on driver-assistance features yet, but we expect them to come standard with GM’s Super Cruise hands-free driving technology. Also, automated emergency braking with pedestrian detection should be standard, as should lane-departure warning with lane-keeping assist, and adaptive cruise control with hands-free driving mode.

As we said, Cadillac hasn’t released exact information on the Celestiq’s powertrain. From what we know, the new flagship sedan will be available with both all-wheel drive and four-wheel steering. It should use two electric motors, one per axle, drawing its electrons from an Ultium battery pack.

The Celestiq’s driving range should be at least 300 miles per charge thanks to a large 100.0 kWh battery. We can expect GM to squeeze even larger Ultium batteries, as we saw with the GMC Hummer EV. For reference, the main rival of this sedan is the Model S, which offers a driving range of a whopping 402 miles.

The new 2024 Cadillac Celestiq will not be a cheap sedan at all. As per the latest news, the forthcoming flagship model will cost a whopping $300,000. By the way, with some customization, the price will definitely be pushed even higher. As you can see, this model is one of the most expensive in the world.

The Celestiq will be built by order, and the number of these sedans will be definitively limited. We can expect the new flagship model to go on sale sometime next year.