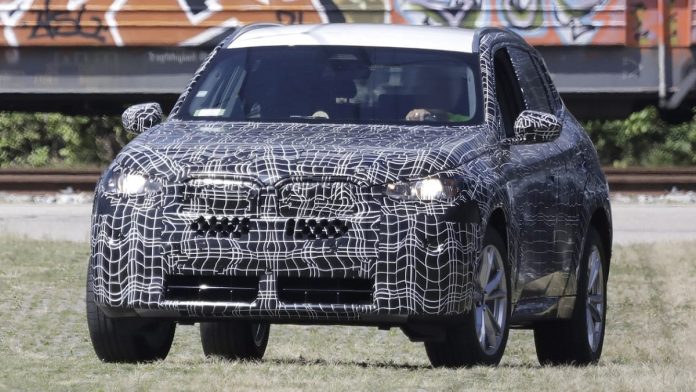 The new 2024 BMW X3 has been spotted testing again on the streets of Munich. The forthcoming SUV is wearing heavy camouflage, revealing a few details, specifically at the front. The overall design is refreshed and it seems that the new X3 is about to receive the same treatment as the recently revealed BMW X1. The spotted prototype features a similar kidney grille and a new set of headlights. We wouldn’t be surprised to see similar changes inside as well.

As for the powertrain options, the new X3 will be the last one that will offer gas engines. Many believe that aging engines will be replaced with plug-in hybrids and fully electric variants.

The 2024 BMW X3 is coming, and judging by the first spy shots, it will feature a similar design to the recently-revealed X1. From what we can see, the new SUV dominates on the front end with taller kidney grilles and new headlights.

On top of that, the wheel arches are boxier, and you can expect sharper body lines. Interestingly, out back, the new X3 will only introduce a large U-shaped indentation in the bumper underneath the tailgate.

Unfortunately, at the moment, there are no available spy shots inside the new 2024 BMW X3. In general, there is no need to worry because this SUV has so far offered a roomy and practical cabin. The cargo volume of this SUV can be expanded from a generous 28.7 to 62.7 cubic feet.

The last model received some upgrades that will carry over into the new one. We’re expecting to see the same freestanding 10.25-inch touchscreen that replaces last year’s 8.8-inch unit. A much bigger 12.3-inch version is also available, as is a 12.3-inch digital driver information display. Other extras that are expected to be offered as options include leather upholstery, ambient cabin lighting, heated steering wheel, heated/ventilated front seats, heated rear seats, wireless charging, and gesture control.

As for the powertrain, nothing is currently known. According to reports, the new 2024 BMW X3 could be the last model powered by a gas engine. In general, we’re expecting to see at least one plug-in hybrid and electric variant. Anyway, we don’t know if the range will eventually include M Performance and full M models. On the other hand, many believe that the X3 M model will use one of BMW’s existing engines.

The new 2024 BMW X3 is expected to hit the market sometime next year. Finally, the five-year-old model is just about to receive some refreshments outside and inside. Despite the car’s body is heavily camouflaged, we saw a few changes, mostly at the front. Unfortunately, we don’t have any official information about the new SUVs’ pricing yet. The current model sDrive30i costs $43,700, while the xDrive30i is an additional $2,000.

The M40i is the upper trim, which starts at almost $58k, while the high-performance X3 M is $69,900. The Competition model is the most expensive, with a price tag of $77k. In the same premium compact crossover class, the Lexus NX is around $40k, while the Acura RDX is in a similar bracket.