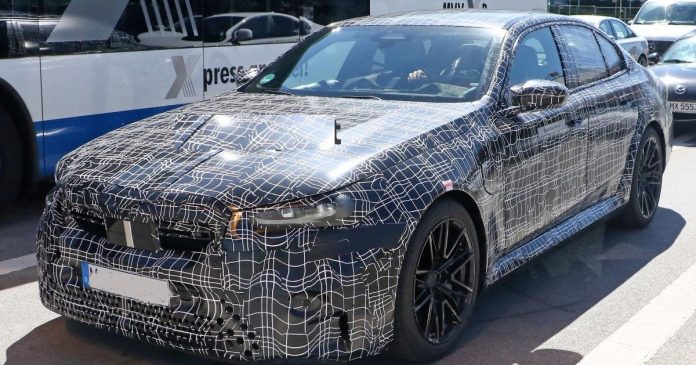 With the next generation of the 5 Series line, BMW is once again undertaking significant design revisions. Hardcore sedan consumers are interested in seeing what the new 2024 BMW M5 PHEV model will bring on. They are anticipating larger displays and more fuel-efficient powertrains.

However, the most noticeable changes include a front bumper that no longer resembles the original M5s and is starting to resemble EVs like the i4 due to a reduced pair of side air vents. Here is a peak of what this supercharged sports car will bring.

The redesigned 2024 BMW M5 PHEV, which has a lot of camouflage on it, looks definitely more aggressive than before. The wider grille, which is luckily not as gaudy as the one on its smaller brother M3, is only one of several alterations that have been made. As we can see, the basic headlights and taillights will be swapped out with better versions. We also noticed a sportier hood and the new quad exhaust system. Even though the prototype is very well hidden, we can tell from it that BMW’s design team chose to give the 5er a sharper look.

Additionally, if you choose the Competition option, you’ll get the M Sport exhaust system, extended black exterior trim pieces, and dramatic M Shadowline headlamps. You’ll also have a choice of three different 20-inch wheels wrapped in non-run-flat tires. The Executive package is available as well, and it brings doors that automatically soft-close, and extra parking aid functions to keep us from damaging our valuable alloys. Overall, as you can see, the M5 is a luxury car that was made to handle mountain hairpins, blasts on the autobahn, and the stresses of everyday life.

The new 2024 BMW M5 PHEV will reportedly introduce more elegant sport seats with leather upholstery. BMW hasn’t adopted an all-touchscreen design strategy like many of its rivals, making it simple to change the radio or air conditioning while the car is moving thanks to tactile buttons. Numerous desirable options, like a heated steering wheel, heated front seats, and a power-adjustable steering column, come standard. There are, however, options for heated rear seats, front seats with vents, massaging features, and automatic climate control for four zones.

Just like the regular M5, the PHEV version will have a 12.3-inch touchscreen control and the latest BMW’s iDrive system. There is also a Wi-Fi hotspot and basic connectivity for Apple CarPlay and Android Auto. Customization options for the interior now include Smoke White/Black Full Merino leather and Tartufo Full Merino leather.

The XM, which is the company’s flagship SUV, will hold the distinction of being the first plug-in hybrid genuine M model ever produced. This model produces around 650 horsepower and 590 lb-ft of torque, respectively. However, the 2024 BMW M5 PHEV will be the second one available. It should come with a more powerful plug-in hybrid 4.4-litre twin-turbo V8 that might deliver more than 700+ horses.

If the XM is any indication, the M5 may be able to provide an electric driving range that is greater. This would allow owners to drive to and from work in silence, using only the power of the battery. It is worth noting that the Competition package is an add-on that gives even more horsepower. This model also has a more resonant exhaust, a stronger suspension, and Competition badging. The current variant of this model reaches 60 miles per hour in under 2.8 seconds, which is a great result.

The current M5 is rated at 15 mpg in the city and 21 miles per gallon on the highway. Both of these numbers are lower compared to those that are achieved by the Mercedes-AMG E63 S sedan. Anyway, as for the PHEV version, we can expect even better mileage per gallon ratings.

It is anticipated that further information on the BMW M5 PHEV will become available in the coming months. However, manufacturing will start in July of 2023, while its unveiling should happen sometime at the beginning of next year. As for pricing, it will be $65,000 for the base model, while the loaded version will cost $90,000.