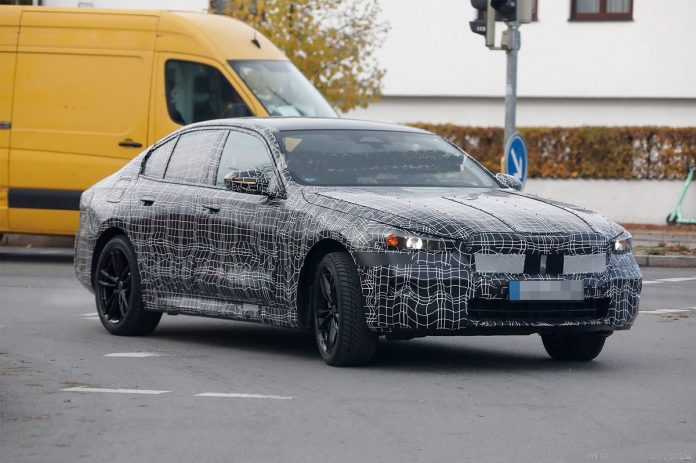 The 2024 BMW 5-Series has been finally caught testing after so many rumors about the next-generation model. The camouflaged prototype looks refreshed and it seems it is wearing an updated design language.

Despite camouflage wrap and covers, we managed to see some of the changes and upgrades. In fact, we first noticed the similar headlights that we saw recently on the new BMW X1. However, on the 5-series, the highlights are sleeker and more elongated, with unique LED graphics and signature angel eyes. Interestingly, the next generation of the 5-Series will use a CLAR architecture, and it will be powered by a selection of mild-hybrid, plug-in hybrid, and fully electric powertrains.

The first spy photos of the 2024 BMW 5-Series are available, and the new sedan has camouflage wrap and covers all over the bodywork. Anyway, we noticed that the next-gen sedan has almost the same headlights as the new BMW X1. Interestingly, the headlights on the Series 5 are sleeker with unique LED graphics.

The latest design language is also present on the rear with a pair of slimmer and horizontally-mounted taillights. The outer shape and position of the taillights are similar to the one on the larger 7-Series flagship. Besides the four-door sedan, we’re expecting to see a more practical five-door Touring variant as well.

On the inside, the 2024 BMW 5-Series will introduce more than we thought. Some spy shots reveal a very comfortable cabin and plenty of new techs. As far as we know, the manufacturer will add a fully digital cockpit similar to the one found in several new models from BMW. Also, expect a standard package that has Apple CarPlay/Android Auto smartphone integration, satellite radio, navigation, Bluetooth, two USB ports, and a 10-speaker/205-watt audio setup.

At the moment, the manufacturer didn’t reveal exact details about its engines. From the information that is available, the next-generation 2024 BMW 5-Series will be available to choose from with a selection of mild-hybrid, plug-in hybrid, and fully electric powertrains. We don’t know yet information if the manufacturer has in mind to keep the other ones.

Currently, the most powerful engine is under the M5 Competition model consisting of a 4.4-liter twin-turbocharged V8 that produces 617 horsepower and 553 lb-ft of torque.

The new 2024 BMW 5-Series will reportedly cost significantly more than before. The current models start at $55,000 for the base unit, while the most expensive M5 Competition is more than $115,000. In the same class is the Audi A6 which starts at $56K, while Mercedes-Benz E-Class is $55K.

Anyway, if you’re seeking more standard equipment at a lower price, you should check out the new Genesis G80, which can be had for $50K. All models including M5 Competition will arrive in the second half of the next year.