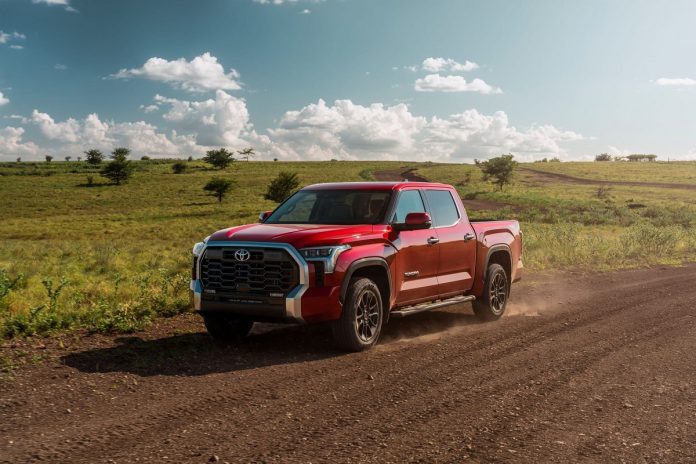 Finally, the 2023 Toyota Tundra renderings just came out, and the upcoming truck looks much better than its predecessor. First of all, it seems that Toyota will make some drastic changes outside the truck, making it look more aggressive. We also expect some changes inside, which include more premium materials and the new infotainment system with a 14.0-inch touchscreen.

Unlike its domestic rivals, the Tundra won’t be available with a V-8. The new full-size truck will likely use a twin-turbo V6 powertrain, but it should also be available with a hybrid system that makes 437 horsepower and 583 pound-feet of torque. As you can see, there are numerous reasons why the Tundra is one of the best trucks in America.

Toyota gives the 2023 Tundra a total redesign after the previous generation went essentially unchanged since its debut in 2007. At first glance, the upcoming truck looks much aggressive, featuring a new massive grille, LED headlights, and larger wheels.

No worries, LED headlights are standard, with projectors on upper trims. The TRD Pro will be available as well, and it should be more aggressive than before. As you may know, this trim is the most favorite because it offers many off-road features. This truck comes with a built-in factory light bar and unique running lights. As far as we know, the manufacturer will introduce a new vehicle with a few different bed lengths.

Cabin With a Chunky Dashboard

Inside, the new full-size truck offers a very modern cabin with a chunky dashboard. The upcoming Tundra will be available in two body styles with three different cargo-bed lengths. It features an extended cab (a.k.a. Double Cab) with either a 6.5- or 8.1-footbed or the crew cab (a.k.a. CrewMax) with either a 5.5- or 6.5-footbed. Overall, all models are roomy, and there is no worry even on the back.

Also, materials used inside look to be much nicer than what was used in the outgoing generation. In general, we expect the quality to increase with the trim levels. As you may know, an 8.0-inch touchscreen is standard in the Tundra, but it can now be upgraded to a horizontally oriented 14.0-inch touchscreen. As standard equipment, we also expect Tundra to come with a wireless Apple CarPlay and Android Auto.

The upcoming 2023 Toyota Tundra is the only full-size pickup truck that’s not available with a V8 unit. Instead, this truck comes with a twin-turbo V6 powertrain that develops 389 horsepower and 479 pound-feet of torque. According to Toyota, the engine is paired with a proven 10-speed automatic transmission.

Along, we expect to see a hybrid version that will feature an integrated electric motor, generating a combined 437 horses and 583 pound-feet. This combination will be allowing pure electric driving at low speeds and excellent fuel economy.

Like the outgoing model, the new Tundra will be capable of towing up to 12,000 pounds. As you can see, it’s slightly lower than other full-size trucks. For example, the F-150 can pull up to 14,000 pounds. However, the Tundra also has a maximum payload capacity of 1940 pounds.

How Much Will Cost the 2023 Toyota Tundra?

The new 2023 Tundra is a full-size truck that will be available in six trims. The base SR trim starts at $36,000, offering great equipment for invested money.

However, you can also choose an SR5 model for 38k, Limited costs 45k, TRD Pro for around 51k, or Platinum/1794 edition for $52,000. Numerous sources indicate that the new Tundra will be available to purchase in the final quarter of 2022.