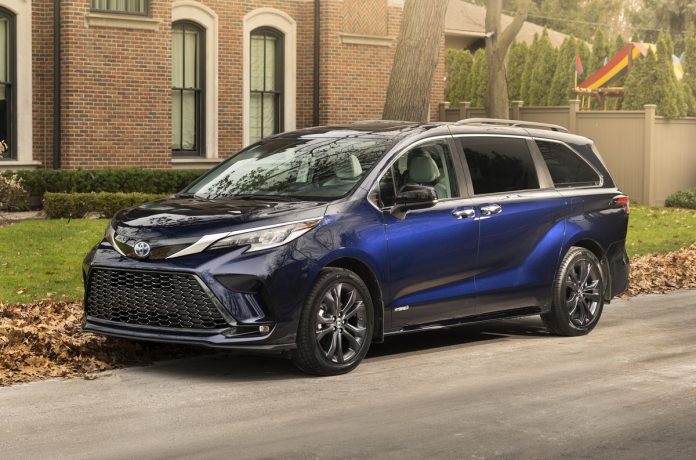 The new 2023 Toyota Sienna will receive many refreshments in the following year. This minivan offers handsome styling, smooth ride, and gas-sipping hybrid setup. On top of that, it looks more like an SUV than a minivan, which was Toyota’s intent to introduce something compact and unique. In addition, thanks to its muscular body, roof rack, and flat hood, this minivan perfectly blends with the brand’s other SUVs like the mid-size Toyota Highlander, and the full-size Toyota Sequoia.

Unlike its rivals Honda Odyssey, the Sienna is offered exclusively with a hybrid system. It features a front wheel drive as standard, but you can still attach all-wheel drive as an optional feature for an additional price.

The new 2023 Toyota Sienna is influenced by SUV designs, featuring very compact and attractive styling. This family-friendly minivan will get some small refreshments outside for the 2023 model year. First of all, the design will change a bit depending on the trim level. For example, you can get a powered sliding side doors on both sides, with hands-free operation from the XLE trim and up.

The sportier XSE models come with some modifications on the front and rear, and it rolls on special-designed 20-inch alloy wheels. Platinum is the most expensive trim that’s wearing more uniqueness, while the new Woodland Edition hosts raised ground clearance by about half an inch.

Toyota’s latest minivan Sienna will come with a more modern and stylish interior. Unlike the previous generation model, the new one will come with a much better dashboard and materials. Upscale trims like Limited and Platinum will offer two-tone interior trim and dashboards covered in stitched leather. However, if you decide to go for the sporty XSE model, you’ll get a black-and-white faux-leather seats with red contrast stitching.

All Sienna models will include the latest interface connected to a 9.0-inch touchscreen display which stands upright on the dashboard. Also, Toyota offers Apple CarPlay, Android Auto, and Amazon Alexa connectivity features all standard. A 12-speaker JBL stereo system can be got as an optional on the XLE and XSE and standard on the Limited and Platinum. On top of that, a rear-seat entertainment system of 11.6-inch display is also available on all trims, except the LE model.

Unlike the previous variant, the forthcoming 2023 Toyota Sienna will be offered exclusively as a hybrid. From what we hear, the powertrain will consist of a 2.5-liter gasoline-powered four-cylinder engine and a pair of electric motors. Thanks to that, the engine will be able to make 243 horsepower.

All-wheel drive is available as an optional feature, and it also adds a third electric motor in the back. The Sienna’s main rival is the Chrysler Pacifica Hybrid model that makes 260 horsepower. The EPA estimates front-wheel drive model to deliver 36 mpg city as well as 36 mpg on highway with all-wheel.

When Can We Expect the 2023 Toyota Sienna to Debut?

The manufacturer is also offering a new Woodland Edition that costs $43,000, while Platinum is of about $51,000. We’re expecting this SUV looking minivan to go into production next year, featuring handsome styling and more equipment than ever.