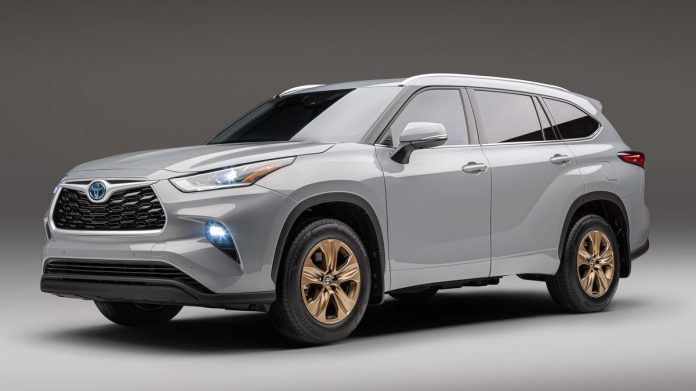 If you are seeking a comfortable, practical, and stylish SUV, then the 2023 Toyota Highlander is worth waiting for. This famous three-row family SUV is one of the most selling models in its class. It offers an attractive, compact design and a variety of configurations to lure the widest possible audience.

We must mention that even an entry-level model has many to offer. Toyota has done a great job with the Highlander, incorporating a comfortable cabin, excellent infotainment, and plenty of driver-assistance features as standard. Under the hood, this model is powered with a potent V-6 engine and is one of only a few three-row SUVs offered with an optional hybrid setup. Alongside the regular model, the manufacturer will also reportedly introduce a new model called the Grand Highlander in 2023. However, the Grand Highlander photos, specs, and prices have not yet been revealed.

Is Toyota Redesigning the Highlander?

The new 2023 Toyota Highlander will enter the market with a few small tweaks. In general, we don’t expect any major changes for next year aside from perhaps some changes on the front fascia.

Overall, the design should remain the same, featuring the same handsome styling. The Toyota Highlander has long been one of the most trusted family SUVs in the segment. It’s recognized by an attractive grille similar to the Toyota RAV4 model. It also features revised LED headlights and a variety of wheel options between trims. We expect the new Hybrid Bronze Edition model to joins the lineup wearing Cement or Wind Chill Pearl exterior paint and a set of cool 18-inch bronze-colored wheels.

On the inside, the 2023 Toyota Highlander is a spacious and very modern. It can fit eight passengers using bench seats in the second and third rows. However, a seven-seat arrangement with second-row captain’s chairs is available only on higher trims. In general, it’s not spacious as the Chevrolet Traverse, but it is acceptable. Behind the third row, you can easily fit four carry-on suitcases, while Chevy Traverse can accommodate six of them. Materials throughout the cabin are improved over those in the previous generation.

As standard equipment, the Toyota Highlander includes an 8.0-inch infotainment system, while the Limited and Platinum get a 12.3-inch display. An 11-speaker JBL audio system, SiriusXM satellite radio, a 4G LTE Wi-Fi hotspot, Apple CarPlay/Android Auto, and Amazon Alexa are all standard. Upscale trims like Limited and Platinum are offering more comfort and premium feel, but they fall short compared to the Palisade or Telluride models.

Like many Toyota models, the Highlander offers a standard suite of driver-assistance features. The list is longer than we thought includes adaptive cruise control, lane-keeping assist, automated emergency braking with pedestrian detection, and automatic high-beam headlamps.

The upcoming 2023 Toyota Highlander is the SUV that’s available with a potent 3.5-liter V-6 engine, producing 295-hp. This engine uses a eight-speed automatic transmission and either front or all-wheel drive. Besides this engine, the manufacturer also offers hybrid as optional. This unit consists of a 2.5-liter four-cylinder and two electric motors. Team up, they are delivering a combined 243 horsepower.

Unlike the base unit, this one comes with a continuously variable automatic transmission (CVT) and with the same choice between front and all-wheel drive. According to Toyota, this powertrain will provide something more fuel-efficient than the standard model earning 36 mpg in the city and 35 mpg on the highway.

How Much Is the 2023 Toyota Highlander?

The release date of the new 2023 Toyota Highlander will reportedly happen in the summer of 2021. Besides small exterior changes, the upcoming family SUV will also gain a more comfortable cabin filled with many techs.

On top of that, Toyota added an optional hybrid powertrain, which is a big plus in our opinion. According to some early information, the Toyota Highlander will start at $38,000 for the standard model, while the hybrid one should cost a few thousand dollars more.