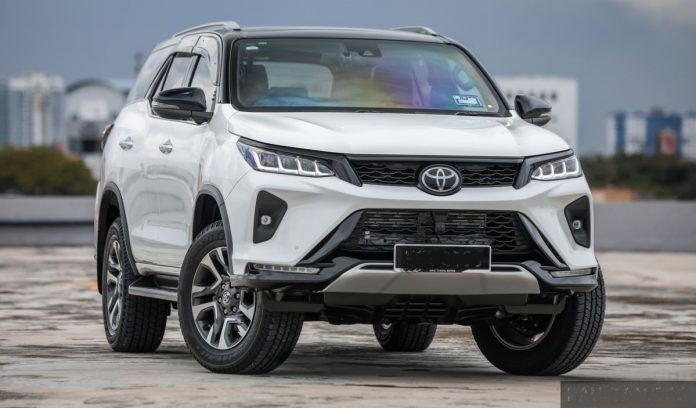 The next-generation 2023 Toyota Fortuner will debut in Thailand next year, featuring many upgrades. Perhaps the most exciting news about this SUV is that it will come with a new 2.8-liter turbodiesel powertrain paired with a mild-hybrid system. Considering that, the Fortuner will adopt the TNGA-F architecture, which should take with ease mild-hybrid diesel powertrain.

This means the upcoming SUV will become the first one with that platform and system in Thailand. The current-generation Fortuner is powered by a potent 1GD-FTV 2.8-liter four-cylinder turbodiesel that produces more than 200 horses. So, adding a mild-hybrid, we can expect even more horses on the table.

The first images of the upcoming 2023 Toyota Fortuner are available, and we must admit that the new SUV looks way better than before. First of all, the size remains unchanged, while some modifications are visible on the front and rear fascia. We immediately noticed the new headlight system with better graphic and grille that’s painted in black.

Also, the huge Toyota badge adores the middle of the grille, while the skid plate is visible as well for extra protection. We also noticed an updated taillight system, as well as the new shiny wheels.

The interior of the 2023 Toyota Fortuner will be modern and roomy. The new SUV will continue with the same three-row seating layout, offering a very comfortable ride. Just like its sibling the 4Runner, the Fortuner will feature the same 8.0-inch touchscreen infotainment system.

The interface on the Fortuner is better, and it includes a set of physical buttons as well as rotary volume and tuning knobs. It is also worth mentioning that as standard this model offers Apple CarPlay, Android Auto, and a subscription-based Wi-Fi hotspot. Unfortunately, like in many modern cars, a built-in navigation system and a 15-speaker JBL audio system are available as optional.

For the first time in history, the proven 1GD family of diesel engines will gain mild-hybrid electrification. From information that’s available, the 2023 Toyota Fortuner will use the same 1GD-FTV 2.8-liter four-cylinder turbodiesel that produces so far more than 200 horses.

However, considering that the 1GD-FTV engine uses a new mild hybrid system, we’re surely expecting to see more output. Many believe that the new system would provide at least 250 horses, providing excellent fuel consumption. Beside Fortuner, the earlier report noted that other Japanese-market models like the Land Cruiser, Land Cruiser Prado, Hiace Wagon, and GranAce could also use the same mild-hybrid system.

We’re expecting the refreshed 2023 Toyota Fortuner to debut in Thailand next year. As we said, the most exciting news is that we will see a new mild-hybrid diesel system.

For those who may not know, the development of diesel-hybrid powertrains have been the subject of rumors since last year, so it’s a great time to be revealed. As for pricing, the Toyota Fortuner could cost $43,000, which is the same price as the current 4Runner TRD Sport.