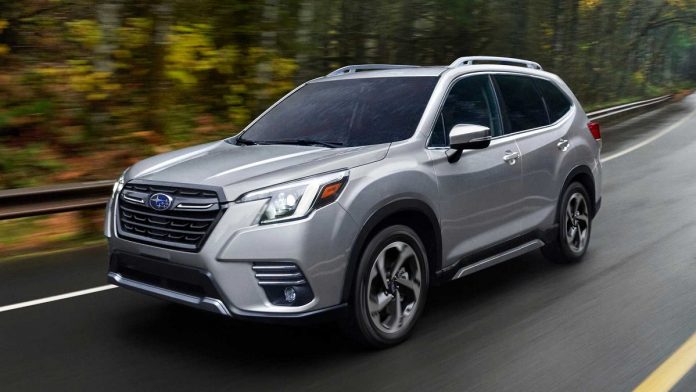 The upcoming 2023 Subaru Forester isn’t just a regular compact crossover, it’s a model that’s absolutely unique. This SUV is in the same class as the excellent Honda CR-V and Toyota RAV4 models. However, for 2023, the Forester will receive several changes and some of a new driver assistance features as standard.

We also expect more quality materials inside and plenty of new technology. Along with this model, the manufacturer will also introduce a new Forester Wilderness that adds an extra skid plate up front, plus more attractive grille treatment. Under the hood, the Subaru Forester will continue to be powered by the same 2.5-liter flat-4 engine that’s capable of producing 182 horsepower.

The new 2023 Subaru Forester will come with a restyled front end, including new headlights and a new front bumper. The Forester is a hot-selling SUV that will stand out from its competitors by its attractive and compact design. The base version looks handsome, but it doesn’t have roof rails, they are optional here.

More sporty styling you can find choosing the Forester Wilderness model. This variant comes with a slightly raised ride height, and it adds an extra skid plate up front, plus a dedicated grille treatment.

On the inside, the 2023 Subaru Forester will be refreshed, and it will replace hard plastic with more softer materials. However, as before, this SUV will offer the same relatively generous 2-row/5-passenger cabin with a rear passenger’s legroom of 39.4 inches. It also provides cargo space of 28.9 cubic feet behind the rear seats, and 74.2 when they’re folded down.

Like the previous model, the new 2023 Subaru Forester will have under the hood the same engine. This model uses a 2.5-liter flat-4 powertrain, delivering 182 horsepower. Unfortunately, this unit comes without a turbocharger in sight, but it’s adequate.

The power goes through an automatic transmission to all four wheels. However, according to Subaru, the new Forester Wilderness has a slightly different transmission setup. From some early testing, the Subaru Forester has EPA 26/33 mpg, 25/28 mpg (Wilderness).

How Much Will the 2023 Subaru Forester Cost?

The most basic of the 2023 Subaru Forester will start at $25,195, plus a destination charge. On the other hand, the Forester Wilderness starts just below $33k. The most expensive is a top Touring trim with a price of $35,295. Just for comparisons, the Honda CR-V starts at $26k, Toyota RAV4 at $27k, while the Mazda CX-5 costs a little more, but it has more options.

The Hyundai Tucson is also in the same ballpark, and it features more standard equipment than the Subaru Forester. According to the latest news, the 2023 Subaru Forester will hit markets at the beginning of 2022.