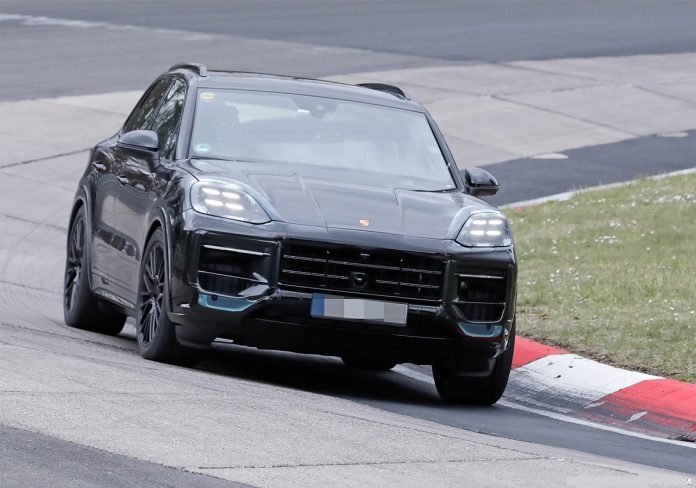 The 2023 Porsche Cayenne prototype has been caught testing on the Nurburgring. As we noticed, the upcoming mid-size SUV will receive some major upgrades. First and foremost, the front end of the tested model has been completely revised, and it features new headlights, as well as more angular shape, similar to the one we saw on the recently introduced Taycan. We also noticed some changes at the rear, including taillights that have been concealed, suggesting a new design.

However, under the hood of the Cayenne are the same engines as before. Buyers will get an opportunity to choose a 335-horsepower 3.0-liter turbocharged V6 once again as the entry-level engine, and an optional hybrid powertrain that delivers 455 horsepower. The Cayenne S is also available, and it uses a twin-turbo 2.9-liter V6, while the optional twin-turbo 4.0-liter V8 is powering the Cayenne Turbo.

The 2023 Porsche Cayenne looks refreshed if we can judge from the first spy shots. The front end of this mid-size SUV has been completely new, and we noticed a better headlight, as well as more angular shape similar to the design on the Taycan.

Unfortunately, at this moment, there is no available image of the 2023 Porsche Cayenne cabin. Many believe the dash will be new to integrate a fully digital dash similar to the one we saw in the Taycan. In general, we expect the new Cayenne to share many things with the mentioned model. It will probably borrow the same curved 16.8-inch digital instrument cluster, and the standard infotainment system 10.9-inch touchscreen.

Like before, the 2023 Porsche Cayenne lineup of engines remains the same. This means we can expect an entry-level engine to be a 3.0-liter turbo V6 producing 335-horsepower, while an optional hybrid powertrain delivers 455 horsepower.

The 2023 Porsche Cayenne in entry-level trim starts at about $70,000. However, the more expensive is the Cayenne S trim, which delivers plenty of pokes. This model costs $87,000. Opting for the Cayenne E-Hybrid, you must prepare $84,000, while Turbo GT is the most expensive model with approximately $181,000.

As you can see, the Porsche Cayenne is not an affordable SUV at all. It competes with models such as the Audi Q8, Mercedes-Benz G-Class, BMW X5, Bentley Bentayga, and Lamborghini Urus. We expect the refreshed variant to arrive later this year as a 2023 entry.