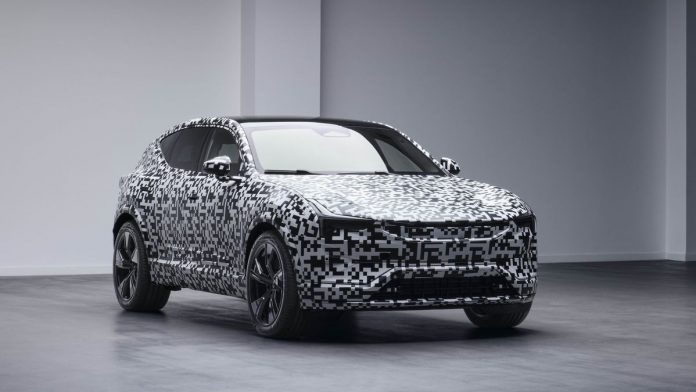 The 2023 Polestar 3 SUV will officially debut in October. After releasing an image of its silhouette, Polestar has finally revealed a camouflaged version. The new SUV will join the growing number of new electric vehicles with an absolutely unique approach.

It’ll be equipped with an array of technologies including more safety features too, for which Volvo is mostly known. We also hear that the Polestar 3 will ride on a new EV platform, just like other upcoming models from this manufacturer. Thanks to a sturdy platform, the new SUV will be able to handle single and dual-motor configurations. We must mention that the Polestar 3 will be the first Polestar built in America. For those who may not know, the Volvo S60 sedan and next-gen XC90 SUV will also be built in a new plant in South Carolina.

The first spy shots shown a very attractive design of the upcoming 2023 Polestar 3 model. According to Volvo, the new SUV will share its platform and battery with the upcoming electric sibling Volvo Embla. On the same platform also sits Volvo XC90, but the Polestar 3 will come with a different floor assembly.

As for styling, we also have some renderings which reveal muscular wheel arches, strong shoulders, and a wide stance. We also notice a new T-shaped headlights and sporty bumpers. Unlike other Polestar models, the model 3 will be more aerodynamic thanks to more slanted A-pillars, a lower height, and the closed-off upper grille.

Inside, the 2023 Polestar 3 could come as a three-row SUV, but it had good reasons not to be. Considering that this model is all-electric, the manufacturer will put a large battery under the floor. The Polestar 3 will share its battery with the upcoming electric sibling (Volvo Embla), riding on the same SPA2 platform. This is basically a skateboard chassis with a different floor assembly that allows large batteries. Among the many interior features we also expect standard 4-zone automatic climate control, a memory driver’s seat, navigation, wireless charging, multiple premium audio systems, a head-up display, and much more.

There should also be plenty of standard safety features such as blind-spot monitoring system with steering assist and cross-traffic alert with brake, run-off road mitigation and protection, lane-keeping aid, and front/rear camera surveillance.

The 2023 Polestar 3 is the brand’s first all-electric that will be available with a single and dual motor configuration. Although we don’t have Polestar 3 range estimates at the moment or battery capacity info, we know that it will provide up to 249 miles of range with a dual-motor setup. So, with the single motor setup, expect around 170 millage.

How Much Does a Polestar 3 Cost?

The Polestar 3 pricing will be in the range between $60,000 to $70,000. The new SUV will debut in October, though a precise on-sale date has not yet been officially revealed.

Thanks to its electric motor and attractive design, the forthcoming Polestar 3 will compete with the models such as the Porsche Macan, Genesis GV60, and Tesla Model Y. Stay tuned for more updates as they become available.