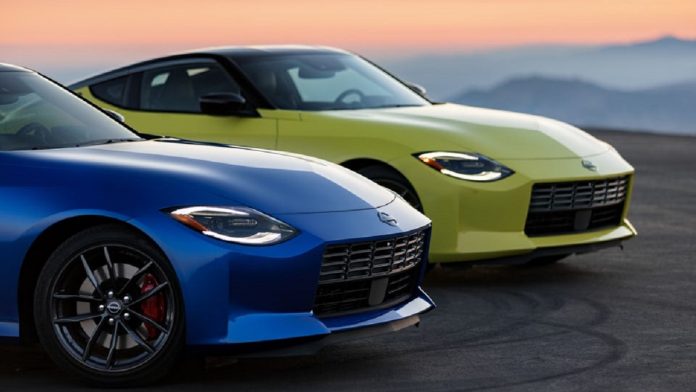 The all-new 2023 Nissan Z sport car will hit showrooms this year, and it will rival the Toyota Supra, as well as the forthcoming Chevrolet Corvette. In general, it’s perfect timing for Nissan to redesign its aging and popular Z coupe. In case you didn’t know, Nissan’s sports cars are sorted with an alphanumeric name, such as the outgoing 370Z, original 240Z, while the new generation will simply be called Z.

From information that’s available, the new Nissan Z will receive a technology update, which should include a new touchscreen infotainment and a host of new driver-assistance features. It will also use a 400-hp twin-turbocharged V6 engine, sending power to the rear wheels through a six-speed manual or a nine-speed automatic.

Nissan’s iconic model will be all-new for 2023. Fortunately, the images of the upcoming car are available, and it looks really sporty. First thing first, the new Z draws design inspiration from past models, but it also has its own futuristic look.

As the previous Nissan 370Z, the latest Z model is nearly the same dimensions. In fact, it has a wheelbase of 100.4 inches, height of 51.8 in, and width of 72.6 in. The only difference is length, which is approximately 5 inches longer (172.4 in). Overall, the shape of this sports car is taut, and the new Z comes with modern touches like (LED lighting) as well as taillights.

The cabin of the 2023 Nissan Z looks modern and is very familiar. According to Nissan, the headroom and legroom measures 38.2 inches and 42.9 inches. If we compare it to the outgoing 370Z, the new Z has almost identical space. The really great news is that the interior is a step forward in terms of technology.

The entry level model offers black cloth seats, 8-way adjustable seat for the driver, and a 4-way manually adjustable seat for the passenger. However, going for the Performance grade, you will get a leather seating surface along with a 4-way power-adjusted driver’s seat, and lumbar support. All models include a standard 8.0-inch infotainment display, while the 9.0-inch unit with navigation is optional. You can also get a 12.3-inch digital gauge display, SiriusXM satellite radio, Apple CarPlay, and Android Auto.

Under the hood, the forthcoming 2023 Nissan Z will not use a powerful 3.8-liter twin-turbocharged V6 that’s powering the current GT-R. Instead, the manufacturer will use a 3.0-liter mill from the Infiniti Q60 Red Sport 400.

As far as we know, the engine will be able to produce around 400-hp sending power to the rear wheels. Fun fact is that Nissan will offer this model with either a six-speed manual or a nine-speed automatic. Just for comparison, the Toyota Supra uses an optional 3.0-liter inline-six engine, making 382 horsepower.

Based on the recent news, the forthcoming 2023 Nissan Z Fun will be available in three trim levels. The base one Z Sport will start at $40,000, offering pretty great features for invested money. Alongside the base model, the manufacturer is also offering the Z Performance model for $45,000, and the Z Proto Specs with a starting price of $50,000.

Overall, the price is still lower compared to the Toyota Supra that costs $45,000 for the base model. Nissan’s iconic Z-car will be available to purchase this year, probably in the final quarter of the year.