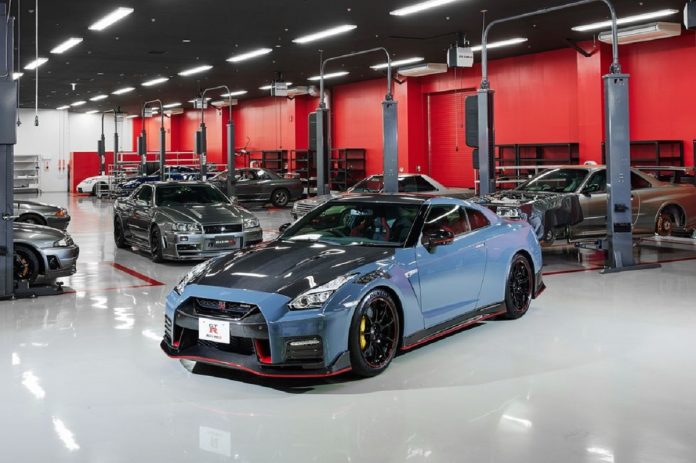 The new 2023 Nissan GT-R is about to arrive, and you can count on much more aggressive styling. If you didn’t know, the Nissan GT-R is one of the most powerful sports cars available, thanks to its 600-hp under the hood. Unfortunately, this model hasn’t changed much since it was introduced in 2009, but it still keeps doing well with other rivals in the class.

For 2023, some small visual upgrades will happen, and inside you can count on more quality materials, as well as on more technology. Unlike most of its rivals, the GT-R comes standard with all-wheel drive, which helps with handling, giving you a much more confident feel.

The forthcoming 2023 Nissan GT-R will look much more aggressive than its predecessor. In terms of overall practicality, this car looks way better than many of its direct rivals, especially if you choose the Nismo variant.

This model features plenty of carbon materials visible on the front, hood, side and at the rear. Generally speaking, we like every detail on this sport car, especially the rear spoiler that looks massive. Unlike the standard model, the Nismo GT-R will also come with sportier black wheels, and it will host red accents on its body.

The new 2023 Nissan GT-R will come with a very nicely appointed interior, offering a host of standard features. As far as we know, the manufacture will add more quality materials and some high-end technology to keep up with its rivals.

Every model will include dual-zone climate control, leather-and-suede-covered upholstery, heated front seats, and more. We’re also expecting to see a much larger infotainment than the current’s 8.0-inch touchscreen. Other than that, the GT-R will include Apple CarPlay capability, built-in navigation, and a Bose audio system. However, there is still no word if Android Auto would be available as an option. Despite many upgrades inside, with the GT-R you won’t find any of Nissan’s driver-assistance features. However, to be fair, those types of electronics aren’t commonplace in most of the rivals either.

Beneath the hood, the 2023 Nissan GT-R is powered by a very powerful engine. This car uses a standard twin-turbo 3.8-liter V-6 that makes an amazing 565 horsepower. On top of that, it comes with a six-speed automatic transmission and all-wheel drive as standard.

Nissan claims the new GT-R can launch itself from zero to 60 mph in just 2.9 seconds, which is better results than the Porsche 911. Like the model before, the EPA estimates the new GT-R with 16 mpg in the city and 22 mpg on the highway.

It’s worth mentioning that Special Edition models will be offered in the U.S., but at this moment, Nissan had not specified exactly how many models will be made. When this car arrives, it will rival models like the Audi R8, Mercedes-AMG GT, and BMW 8 Series.