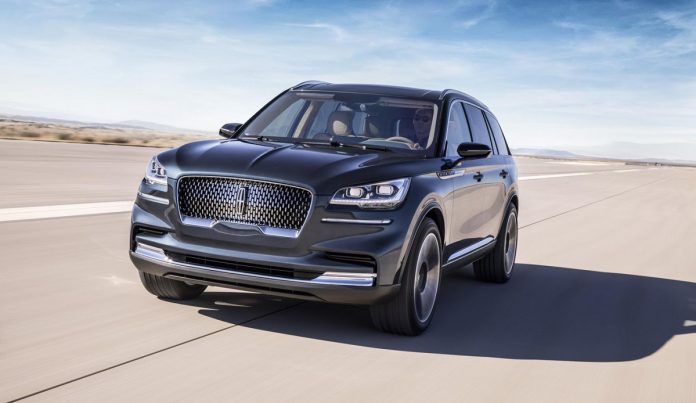 According to the latest report, the new 2023 Lincoln Aviator is in works. However, the most exciting news is that the next-generation Lincoln Aviator will be available with a new EV system. Interestingly, the upcoming EV variant will be the automaker’s first battery-electric vehicle. Lincoln’s best-selling model from the information that we got will come refreshed, and we can expect many upgrades over the current generation.

In general, the all-electric Aviator will definitively gain the most attention, and it could be built alongside the Explorer EV and Mach-E in Mexico. Lincoln last year stated that its goal is to electrify its entire lineup by 2030.

We expect the next-generation 2023 Lincoln Aviator to be refreshed, featuring more attractive design than before. As far as we know, the manufacturer will add LED exterior lighting and various alloy-wheel designs.

The Appearance package will be once more available with panoramic sunroof and 20-inch alloy wheels. The most favorite option is the Black Label package that will add many black accents to this SUV, making it sportier. The new colors will be added as well, including Bronze Smoke and Gilded Green, both with a metallic clearcoat finish.

Inside, the 2023 Lincoln Aviator is modern and spacious. This SUV with a bench seat in the second row can place seven occupants. In general, there’s ample space in all three rows. Cargo area is 18.3 cubic feet behind the third row, and it goes to 77.7 cubic feet with rows two and three folded.

On the technology side, the Lincoln Aviator comes standard with a 10.1-inch touchscreen screen that stands out in cabin. On top of that, the entry-level Aviator also has a 12.3-inch digital driver information display, Apple CarPlay/Android Auto smartphone integration, Wi-Fi, two USB ports, satellite radio, and a 10-speaker audio system.

Blue Oval recently confirmed there will soon be battery electric variants of the Lincoln Aviator. Alongside, we can also expect the same existing engines. The current SUV has been available with a gasoline-fueled setup that consists of a 400-horsepower twin-turbocharged 3.0-liter V6 and a 10-speed automatic transmission. This unit comes with rear-wheel drive as standard, while all-wheel drive is on the options list.

The Grand Touring and Black Label Grand Touring models are using the last-year plug-in hybrid (PHEV) drivetrain. This one uses a twin-turbocharged V6/10-speed automatic transmission, and electric motor powered by a lithium-ion battery. All-wheel drive comes standard with this model.

How Much Can the 2023 Lincoln Aviator Tow?

Reportedly, the 2023 Lincoln Aviator with its conventional combustion engine will be able to tow 6,700 pounds. However, PHEV model provides little fewer numbers, but it can still handle an impressive 5,600 pounds. Unfortunately, we don’t have any numbers of the upcoming EV model.

The 2023 Lincoln Aviator is an upcoming SUV that will be available in a couple of trim levels. Trim levels range from the basic Aviator to a Black Label Grand Touring by way of Reserve, Grand Touring, and Black Label. The entry-level model starts at $50,995, plus destination charge.

At the pinnacle of the lineup is the Black Label Grand Touring, and it costs $88,520. In the Lincoln Aviator’s class there are many popular models, and the closest ones are Genesis GV80, Volvo XC90, and the Audi Q7.