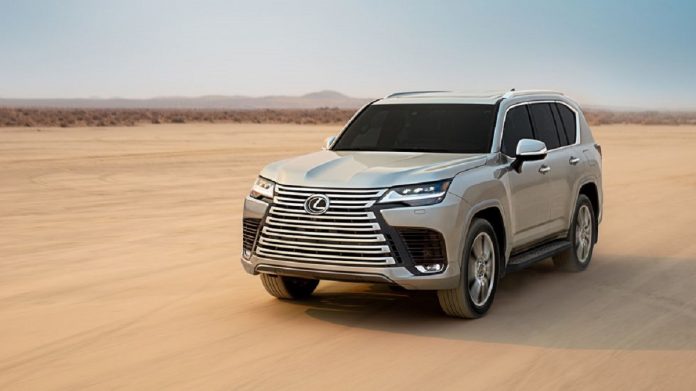 Lexus was unveiled last month the new version of the LX, which is called the LX600. From information that’s available, the new 2023 Lexus LX600 will arrive next year and will be based on the Land Cruiser model that may be gone from the U.S. market. However, Lexus is keeping the flame alive with the forthcoming flagship LX600 model.

Like its sibling LX570, the new LX600 will continue to be attractive, with different exterior styling and interior but with the same hardware beneath the hood. That means the upcoming SUV will use a twin-turbocharged 3.4-liter V-6 engine producing 409 horsepower and 479 pound-feet of torque.

As the other LX models, the 2023 Lexus LX600 will come with the same blocky shape but with more modern detailing. This SUV dominated on the front end with a spindle grille that’s now better looking featuring a larger “L” badge in the middle.

The F Sport model is the favorite option, and it will drastically change the look of this SUV. This model comes with a blacked-out grille and 22-inch wheels. It also has a new Torsen limited-slip differential in the rear and tuning dampers. Lexus claim that there will be an updated Multi-Terrain Select system with different drive modes and various off-road features.

The 2023 Lexus LX600 will surely be more modern than the rest of the LX models. Lexus claim that this SUV will come with several different seating arrangements. The base trim will feature a two-row setup with five seats, while the Premium, Luxury, and F Sport models have a three-row setup with enough room for seven seats. On the other hand, the manufacturer also offers a new Ultra Luxury version that will offer a four-seat setup with two opulent chairs.

As for techy, the new L600 will continue the tradition with a dual-screen infotainment setup using the latest Lexus Interface software. There’s a 12.3-inch touchscreen placed on the top and a smaller 7.0-inch touchscreen bellow that controls the HVAC system. We like the new 8.0-inch digital gauge cluster that is part of standard equipment as well. As its sibling LX570, the LX600 will include driver-assistance features like adaptive cruise control and lane-keep assist.

Beneath the hood, the 2023 Lexus L600 will be available with only one engine option. From the report, it will use a proven twin-turbocharged 3.4-liter V-6 engine that is capable of producing 409 horsepower and 479 pound-feet of torque. If we compare those numbers with the old naturally aspirated 5.7-liter V8, the new and smaller engine beats the aging unit.

We also expect this powertrain to be more fuel friendly thanks to a start/stop system that would be able to turn off with one click. On top of that, the manufacturer will add a new ten-speed automatic transmission as standard equipment.

The new 2023 Lexus L600 will reportedly go on sale next year, likely in the second half. Besides similar exterior styling as on the LX570, the forthcoming model will also use the same mechanics. Nevertheless, it will migrate onto the new platform that is shared with the Tundra truck and Land Cruiser SUV.

Lexus says that the LX600 will start at around $90,000 for the base variant, while the Ultra Luxury version would easily pass the six-figure range. When released, the Lexus LX600 will compete with large luxury SUVs such as the BMW X7, the Land Rover Range Rover, and the Mercedes-Benz GLS-class.