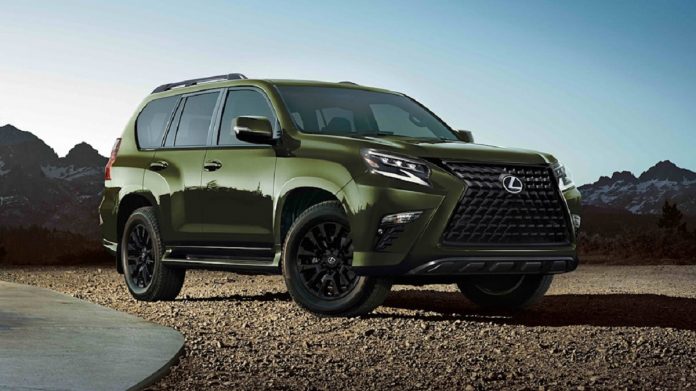 The redesigned 2023 Lexus GX 460 is ready to introduce more updates and changes in the following year. First of all, customers can expect refreshed styling and much more comfortable cabin.

The most exciting news is that the Lexus GX 460 will be available with the new Black Line Special Edition, featuring more attractive styling than the regular model. However, this SUV will still sit on the same old platform, using the same powertrain as before. Pricing and exact availability haven’t been announced yet, but we expect this model to arrive sometime next year.

The 2023 Lexus GX 460 will come refreshed and visually modernized. However, it will still sit on the same old platform as before. The new SUV embraces a sophisticated design and a much more modern front fascia. It’s recognized by the new Premium Triple-Beam LED headlamps, attractive grill with Lexus logo, and with stylish 19-inch wheels.

Alongside the regular model, the manufacturer will also introduce the new Black Line Special Edition. Unlike the other trims, the BlackLine comes with gloss black 18-inch wheels, a black grille surround, and roof rails. Behind, there are new LED taillights and the new bumper as well. Overall, we like how this model looks, especially wearing the Nori Green paint.

Most of the upgrades of the 2023 Lexus GX 460 will be visible inside. The manufacturer recently reveals that the forthcoming SUV will be much more stylish, featuring plenty of quality materials and new technologies. First of all, the upgraded infotainment of a 10.3-inch touchscreen is present, and it should be much brighter, with a higher resolution.

The new system comes with Android Auto and Apple CarPlay compatibility, which is sorely missing from the previous generation. Navigation is also standard, parking sensors, power-folding, as well as heated mirrors.
On the safety side, the Lexus GX 460 comes standardly with a ten airbags, active headrests, Lexus’ Safety Connect system with 24/7 emergency services, and now the Lexus Safety System + with multiple driver aids.

Like the predecessor, the new 2023 Lexus GX 460 will reportedly sit on the same platform, using the same proven engine. This means we can expect once more under the hood a potent 4.6-liter V8 powertrain capable of producing 301-horsepower, sending power to all four wheels.

This unit comes with a smooth 6-speed automatic transmission, delivering quiet shifting. According to some news, the new model will be less fuel hangry than before. The current variant with the same engine offers 15 mpg city/19 mpg highway/16 mpg combined.

The debut of the newest 2023 Lexus GX 460 is set for the following year. Most likely that it will hit stores in the second half of the year. Pricing and exact availability haven’t been announced yet, but we should expect more information in the coming months.

The new SUV will be more attractive, and it will offer much more comfortable cabin. Although, the most exciting news is that it will be available in a special edition Black Line trim.