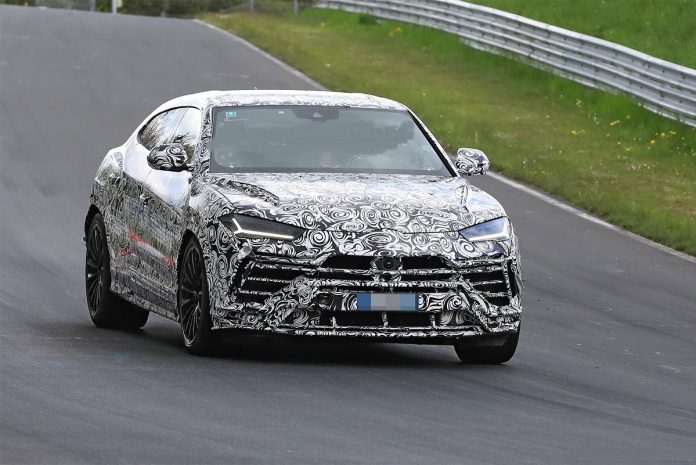 If you’re a fan of fast SUVs, then the upcoming 2023 Lamborghini Urus is worth considering. This SUV looks sporty, aggressive, and it has a very modern cabin. The first ever Urus hit the market in 2018 as a 2019 model, making an instant boom in the world. Despite the pandemic situation, Lamborghini managed to sell over 7,450 vehicles in 2020, which is pretty good numbers.

After exactly three years from the first release, the photographers caught the 2023 prototype wearing a lot of camouflage gear. However, we noticed a new front fascia and additional vents at the outer edges, also known as air curtains. There’s also a more attractive hood with its own vents and a couple of visible upgrades as well.

The spy shots of the upcoming 2023 Lamborghini Urus are available, and we noticed some improvement over the current generation. First of all, the spied prototype is wearing a lot of camouflages, but we can clearly see some of the changes. The new front fascia is present with what looks to be additional vents at the outer edges.

As mentioned, this is also known as “air curtains,”, which help direct air flow around the flanks of the vehicle. We also noticed new wheels, and there’s also a new hood with its own vents. On the back, the sale sporty lines remain but the manufacturer added more thinner taillights and new exhaust tips.

There are also likely to be some tweaks inside the new 2023 Lamborghini Urus. From what we have heard, on the list there will be an updated infotainment system, more standard features, and plenty of optional amenities as well. However, seating layout is the same, and we expect five passengers to sit comfortably.

Interior storage offers up to 22 cubic feet in its cargo area, but it drops by 2 cubes with the optional rear bucket seats. Besides more modern cabin and some refreshments, we could also see more advanced electronic driver-assist features this time.

So far, Lamborghini hasn’t mentioned anything about the engine of the updated Urus. However, they confirmed last year we’ll see an additional powertrain offered at some point, possibly a plug-in hybrid. The likely bet is the same system we saw under the Porsche Cayenne Turbo S E-Hybrid. Both models are made on the same MLB Evo platform that allows a hybrid system.

The Cayenne Turbo S E-Hybrid system generates 670 hp from an electric motor and 4.0-liter twin-turbocharged V-8. The current Urus is powered by a 4.0-liter twin-turbo V-8 that delivers 641 hp. From many testings, with this engine Urus managed to run from 0 to 60 mph a in about 3.5 seconds, with a top speed of 189 mph.

The 2023 Lamborghini Urus will hit the market sometime next year, featuring a refreshed front fascia and a couple of upgrades here and there. The current model starts at $222,000, and fully loaded it can touch $250,000. Although the Urus costs close to a quarter of a million dollars, it’s still one of the most favorite SUVS in the class.