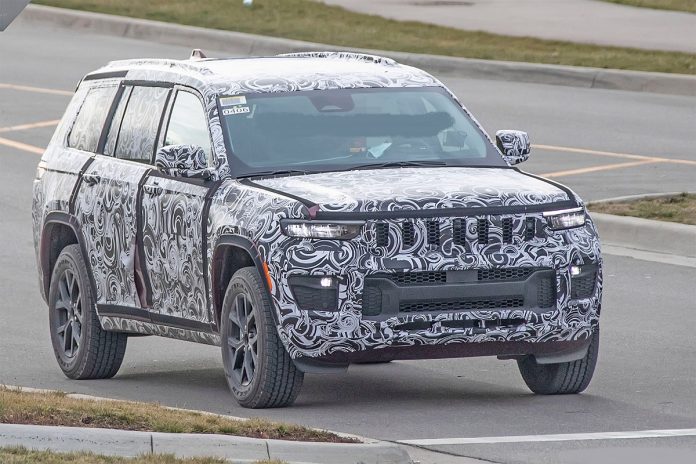 The two-row 2023 Jeep Grand Cherokee has been spied testing, wearing almost the same styling as the fourth generation. From available spy images, the upcoming fifth generation should introduce some novelties, including the new L variant.

If you didn’t know, the Grand Cherokee L is a luxuriously three-row version of Jeep’s popular SUV. First of all, it’s longer, hosting a more comfortable cabin and room for seven passengers. Meanwhile, the two-row Grand Cherokee was only able to fit five occupants. The redesigned fifth-gen model will arrive sometime next year as the 2023 model year. Moreover, in the same territory are luxury models such as the BMW X5 and Genesis GV80.

Like before, the new 2023 Jeep Grand Cherokee will be available with several different trim levels. So, depending on chosen trim, the design of this model will vary. The Trackhawk is the most favorite option, featuring a more aggressive appearance than the standard one. This model comes with Quadra-Drive II 4WD, red tow hooks, along with its big 18-inch off-road wheel/tire package.

The Trackhawk also stands apart from the standard model thanks to a touting quad exhaust tailpipes and a “Supercharged” script on the front doors. Regardless, the manufacturer should also introduce a Desert-Rated Gladiator Mojave-like trim that will boast additional ride height, model-specific shocks, springs, and more.

We anticipate that the new 2023 Jeep Grand Cherokee will come with the same comfortable cabin as the previous generation. However, as we said already, this model is available in two forms. There is a model with two rows of seats and the much bigger L variant that offers three rows. Besides, the upcoming SUV will most likely feature the same key infotainment found in the current model.

That means we can expect an 8.4-inch touchscreen on the entry-level model, while a larger 10.1-inch screen will be offered as the upgraded setup. In addition, both models will use the latest FCA’s Uconnect 5 infotainment software. However, the Grand Cherokee L is a much better choice because it also offers a 10.3-inch digital gauge cluster and 10.0-inch head-up display.

The upcoming 2023 Jeep Grand Cherokee will probably be powered by the same powertrains. However, there is one exciting piece of news, and that’s the plug-in hybrid 4xe model that will join the lineup soon. Besides, the Grand Cherokee continues to use a 3.6-liter Pentastar V-6 that makes 295 horsepower and 260 pound-feet of torque. A more powerful 5.7-liter V-8 comes standard with a four-wheel drive that makes 360 horsepower and 390 pound-feet of torque.

Both engines make slightly less power choosing the Grand Cherokee L variant. The high-performance Grand Cherokee SRT is available as well, using a 6.4-liter V8 that generates 475 horsepower. However, the most powerful is still the Trackhawk model with a 707-horsepower thanks to the 6.2-liter supercharged V8 engine.

The release date of the new 2023 Jeep Grand Cherokee will most likely happen next year. Besides the two-row model, the manufacturer will also introduce a Grand Cherokee L variant, offering three rows of seats.

The current Jeep Grand Cherokee SUV has a Manufacturer’s Suggested Retail Price (MSRP) of $32,350 for the base model, and the new one should be in the same pricing range. The most favorite Jeep Grand Cherokee SRT starts from $70,640, while the Trackhawk costs around $89,145, and it can go up to $100,000 with options.

2024 Jeep Recon Is Unmistakably Influenced by the Legendary Wrangler