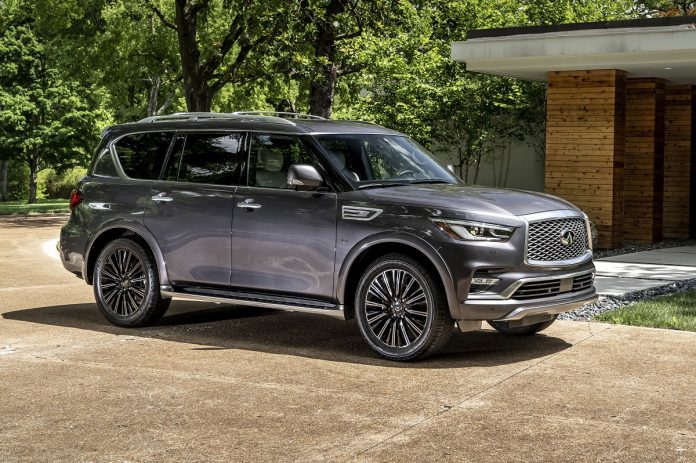 The three-row 2023 Infiniti QX80 will be reportedly refreshed next year, and we can expect it to look more attractive and upscale. Like the model before, the new one will come with an interior that’s sturdily built, offering a very smooth ride. Theoretically, this model is fundamentally a gussied-up Nissan Armada, which also rides on the same platform as the Infiniti QX80.

However, the Infiniti QX80 differs from the mentioned model in many things. This model comes with fully independent suspension, which delivers a tranquil ride. On top of that, it’s powered by a very fuel-thirsty V8 engine that makes up to 400 horses.

The full-size 2023 Infiniti QX80 is one of the biggest SUVs in class. Its overall length is 210.2 inches, and it has a wheelbase that measures 121.1 inches. The size is similar to the standard-wheelbase versions of the Cadillac Escalade and Lincoln Navigator. However, the Infiniti QX80 is bigger than several entries like the BMW X7, Mercedes-Benz GLS-Class, and the Lexus LX.

In general, it looks big not only because of its massive size, it also features a very large grille, muscular body lines, and big wheels. Depending on a chosen trim, the design of this SUV will vary. For example, if you go for the Premium Select trim, you’ll get more black chrome exterior trim, larger 22-inch wheels, black mirror caps, and more. The top Sensory trim is the most expensive, and it comes with hydraulic Body Motion Control, and auto-leveling LED headlights.

Inside, the 2023 Infiniti QX80 is comfortable and quiet. The design of this SUV has been changed many times since its debuted in 2011 as the QX56. For 2023, the manufacturer will make some small revision replacing aging materials with more quality ones. Also, the center stack has finally been redesigned, and we like the new more intuitive single 12.3-inch touchscreen.

Additionally, the infotainment is using the brand’s latest InTouch connectivity services and standard onboard navigation. As a standard, you can count on Android Auto, Apple CarPlay, 13-speaker Bose stereo, wireless device charging, and an array of charge ports.

Beneath the hood, the 2023 Infiniti QX80 teams a 5.6-liter V8 powertrain with a seven-speed automatic transmission. Thanks to that, it produces 400-hp with a choice of either rear or all-wheel drive setup. As before, we can expect the new one to run from zero to 60 mph in 5.9 seconds.

However, the current QX80 has awful fuel economy rated at 14 mpg in the city and 20 mph on the highway. From the information that we got, some mechanical changes will happen, and we can expect better numbers. Fortunately, the Infiniti QX80 can tow up to 8500 pounds, which beats the Mercedes’s rating by 800 pounds.

The release date of the 2023 Infiniti QX80 will happen sometime next year. Based on rumors, it will arrive in the first quarter of the year. As before, we’re expecting the new SUV to be offered in three trim levels. The entry-level model Luxe starts at little less than $72,000, while the more equipped Premium Select at $77,000.

The Sensory is the most expensive starting at $87,000. Given that price, the QX80 is in line with premium models such as the Mercedes-Benz GLS 450 and the BMW X7 xDrive40i.