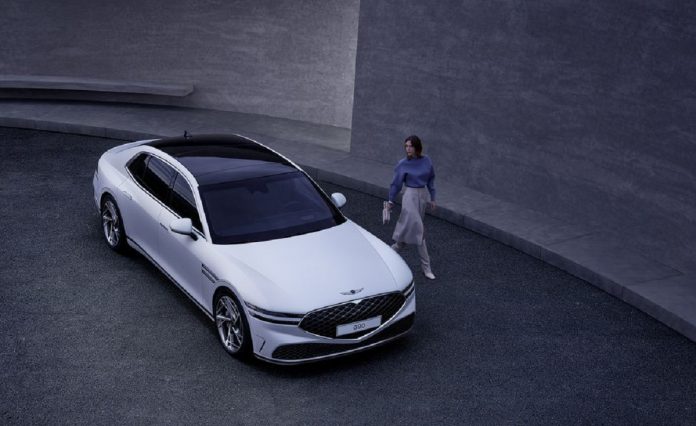 The 2023 Genesis G90 is one of the most luxurious sedans, which is getting a dramatic redesign. In case you didn’t know, the exterior styling of this model is inspired by a G80 and GV80 SUV. However, the G90 has a few unique touches that place this model at the top of the company’s model hierarchy. Like the exterior, the interior has been also redesigned, and the new G90 now comes with a plethora of features.

Genesis says that the twin-turbo 3.5-liter V-6 will be under the hood as the standard powertrain. This engine is also available on the other Genesis models and it produces a stout 375 horsepower. Another option is a 420-hp powertrain that uses a 48-volt hybrid system and an electric supercharger.

The exterior of the 2023 Genesis G90 will be redesigned, and expect the new flagship to be very attractive. As we can see from the first official images, the G90 dominates on the front. It features a new Crest Grille and sharp Two-Line MLA (Micro Lens Array) headlamps. Also, unlike the smaller G80, it has a sleeker side profile, featuring attractive wheels.

It also comes as standard with a Multi-Chamber air suspension, which reportedly optimizes the pressure in the air springs for added stability and a more comfortable ride.

The interior of the 2023 Genesis G90 is getting also an overhaul for 2023. As far as we know, the manufacturer will introduce a fresh design and posh materials. Thanks to that, the new sedan will easily go head-to-head with its rivals. We expect a comfortable cabin that has enough room for up to five passengers.

Genesis will also reportedly introduce several features that will make this sedan more luxurious. So, expect a new infotainment system paired with a large screen, features such as massaging seats, and a premium stereo system. A variety of advanced driver assistance systems are available including cutting-edge driving technology and innovative driver assistance system.

Under the hood, the 2023 Genesis G90 is available with two engine options. The first one is a twin-turbo 3.5-liter V-6 that produces 375 horsepower. This engine comes with eight-speed automatic transmission and it uses an all-wheel-drive arrangement.

Another option is a more powerful one thanks to a 48-volt hybrid system and an electric supercharger. According to Genesis, combined, this system produces 420-hp. The most efficient G90 is the base model, providing 18 mpg city and 26 mpg highway. Going with the more powerful engine, the efficiency will drop to 17 mpg city and 24 mpg highway.

The starting price of the new 2023 Genesis G90 is expected to be around $75,000, and it should reach about $81,000 when loaded with options. Compared to other models in the class, the G90 has a similar price point as the Mercedes-Benz CLS-Class and the Lexus LS. As for the release date, the flagship luxury sedan will be available to purchase in the coming months.