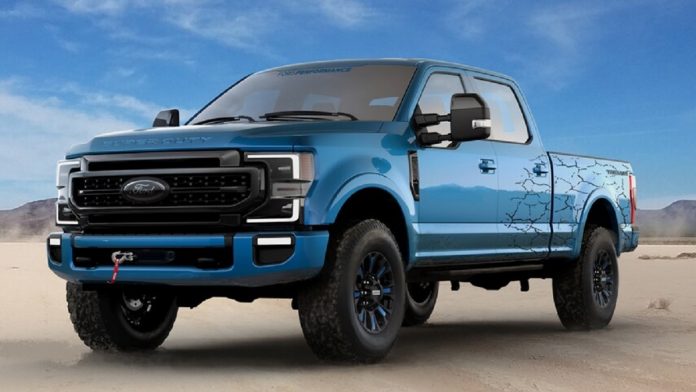 The forthcoming 2023 Ford Super Duty will reportedly bring some changes in the following year. First of all, the manufacturer will make this truck more competitive thanks to new wider touchscreen choices and aesthetic packages. If you didn’t know, Blue Oval offers three models of the Super Duty models. The lineup begins with an entry-level F-250, and it goes to F-350 and bigger F-450. The mentioned models are available in three cab configurations and with a single or dual rear-wheel drive system.

In general, the most noticeable changes are visible inside. Blue Oval manufacturer will give some various aesthetic improvements to the Ford Super Duty series. Expect updated infotainment and plenty of advanced technology. On the other hand, nothing will change under the hood of this model.

Is Ford Redesigning the Super Duty?

As far as we know, the new 2023 Ford Super Duty lineup that includes F-250, F-350, and F-450, will undergo a significant makeover. Blue Oval will make each truck unique, and the main reason for that is its competitor Ram HD. Reportedly, all models will come with a redesigned grille, bigger bumpers, and new taillights.

Additionally, the new truck will ride on the same stiff platform as its predecessor. So, expect dimensionally to be the same, featuring large proportions. Moreover, numerous wheels and tire options are expected as well, and some new exterior paints.

The new 2023 Ford Super Duty comes with a more sophisticated interior layout than the previous generation. The latest models will receive some upgrades from the information that we got, including more premium materials and some technology boost. With a cleaner dashboard, the new Ford Super Duty is closely related to the lighter F-150 model. By the way, there is plenty of room inside for all occupants. Standard equipment includes an 8.0-inch touchscreen with Apple CarPlay, Android Auto, Wi-Fi, and Amazon Alexa.

The powertrain of the new 2023 Ford Super Duty will remain the same. This truck is powered with either diesel and gasoline engines. As basics, the manufacturer used a 7.3-liter V8 gasoline engine that is capable of producing 430 hp and 475 lb-ft of torque. In general, this is the most powerful engine at the moment in the truck segment.

The next engine comes optional and is more potent than a gasoline engine. This unit consists of a 6.7-liter PowerStroke diesel engine, developing around 475 horsepower and 1050 lb-ft of torque. Thanks to this engine, the Super Duty trucks are capable of towing 37,000 pounds.

The new 2023 Ford Super Duty is coming with a mild upgrades and changes. In addition, we expect this model to be in the same range as the current one, which starts at around $35,500. According to some gossips, Ford could also introduce new optional packages that will raise prices significantly.

We heard that Blue Oval would release this truck later in 2022 to continue its rivalry with a heavy-duty lineup from Ram and Chevrolet.