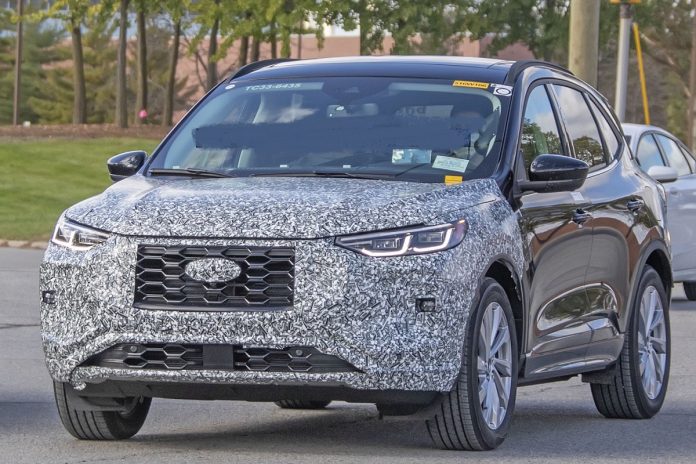 The redesigned 2023 Ford Escape has been spied two days ago for the first time this year. We aren’t seeing any noticeable differences compared to the current model, but we are hoping that the final variant will get some changes. Generally speaking, we suspect that there will only be minor updates to its body under the wrap. Of course, the interior will be more modern, and Blue Oval will definitively add more standard equipment.

As before, the new one will probably keep the same four engine choices. The current base model uses a turbocharged 1.5-liter inline-3 as standard, while a turbocharged 2.0-liter inline-4 comes optional. Besides, the manufacturer also offers one HEV and PHEV engines as well.

As you can see, the forthcoming 2023 Ford Escape is dealing with a modest facelift. Anyway, the fourth-generation Escape launched in 2020, and it becomes an instant hit in the compact SUV segment, thanks to significant updates. However, we cannot expect the same to happen with the new one, but some small cosmetic changes are surely there. First of all, the recently spied SUV has a camo wrap on the front fascia, and we noticed a bit more aggressive grille compared to the current model.

The grille appears to be wider and is flanked on either side by narrower headlights. However, things at the back are less obvious, and we aren’t seeing any noticeable differences.

Considering the 2023 Ford Escape is still in an early stage, we’ve heard nothing officially about its interior. In general, updated technologies are quite likely, and it’s possible that Ford’s BlueCruise driver-assist system could find its way to the upcoming model. If that happens, the Escape would get an edge over competitors in the segment.

The seats should be more supportive, and like before, the Escape will provide rear legroom of 40.7 inches. That legroom matched the one of the Honda CR-V. The luggage area measures 33.5 cubic feet, and it can be expanded to 65.4 cubic feet behind the front seats.

Like the previous model, the new 2023 Ford Escape will come with the same four engine options. The first one that powers the base model is a 1.5-liter turbo unit making 180 horsepower and 190 lb.-ft of torque. An 8-speed automatic transmission comes standard as the front wheels (FWD). All-wheel drive (AWD) is optional. The next engine is optional, and it consists of a 2.0-liter turbo 4-cylinder engine that develops 250 horsepower and 280 lb.-ft of torque, using the same 8-speed transmission. All-wheel drive on this one is standard.

Both the hybrid and the plug-in hybrid use the same naturally aspirated 2.5-liter 4-cylinder engine, paired with an electric motor. Thanks to that, a combined output is 200 horsepower. Unlike the hybrid, the PHEV plug-in is being able to recharge its bigger battery from an outside source, and to cover around 37 miles in electric vehicle (EV) mode.

The new 2023 Ford Escape is reportedly going on sale towards the end of 2022 with no significant upgrades. In short, you can expect it to receive mild upgrades that will make it a bit more aggressive compared to the current model. Considering all above, the price of this model will be in the range from $27,000 to $41,000.