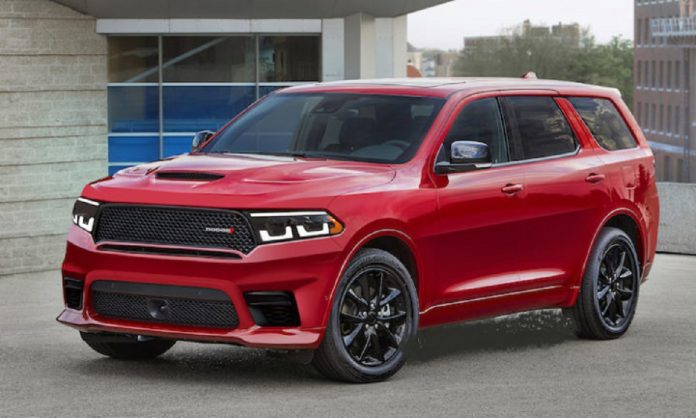 The redesigned 2023 Dodge Durango will be released next year with a more handsome styling. This typical midsize 3-row SUV is very well known for its distinctive styling and high power output. According to Dodge, the following generation model will break stereotypes of the family crossover with its muscular styling and sporty cabin. As far as we know, the new SUV will borrow some design lines from the famous Charger model. However, don’t expect the same sportiness, but it should be a head-turner for sure.

Aside from its unique design, the new model will deploy three powerful engines that make Durango really competitive. In the class where Durango is are also models such as the Kia Telluride, Hyundai Palisade, and Chevrolet Traverse.

The upcoming 2023 Dodge Durango exterior will remain unique, and there are no other crossover SUVs available on the market that look quite like it. It comes with an attractive design followed by the same distinct curves we saw on the Dodge Charger. However, the new Durango looks more muscular and boxy.

The look of the Dodge Durango will change a bit depending on trim levels. For example, if you choose the R/T and SRT 392 models, you’ll get a decidedly sporty look with an attractive hood. However, by selecting the Citadel trim, you can count on more premium materials and tasteful use of chrome. Dimensionally, the Durango is similar to the Volkswagen Atlas, Mazda CX-9, and Ford Explorer.

The cabin of the 2023 Dodge Durango will be refreshed with some nicer materials and techs. The three-row SUV is spacious inside, and you can upgrade the bench second-row seats to captain’s chairs that easily tilt and slide. In general, the third row, as in many models, is best for children.

Standard safety tech features on the Durango include a backup camera with rear cross-path detection and blind-spot monitoring. Most rivals in this segment are more generous with standard safety features like automatic emergency braking and lane-keep assist.

Under the hood, the 2023 Dodge Durango will probably keep the same engines as its predecessor. That means we can count on three engines. The current base model uses a 3.6-liter V6 powertrain, delivering 295 horsepower. More potent as an option is a 5.7-liter Hemi V8 that comes standard with an R/T model and is optional in the Citadel trim.

Lastly, the top SRT 392 is available with a 6.4-liter V8, producing 115 horsepower more than the smaller V8 option. Rear-wheel drive comes standard, while all-wheel drive is optional. Every Durango comes with a smooth-shifting 8-speed automatic transmission.

How Much Will Cost the 2023 Dodge Durango?

The new 2023 Dodge Durango release is set for the following year. Probably, the manufacturer will introduce this model at the beginning of 2022, while sales should start a few months later. As for pricing, it hasn’t been confirmed for the 2023 Dodge Durango. We’re expecting the base model to start around $33,000, while the GT trim might be around $37,000.

The grip-roaring SRT 392 trim should cost about $65,000. Pricing of the V6-powered Dodge Durango is in line with models such as the Kia Telluride, Honda Pilot, and Toyota Highlander.