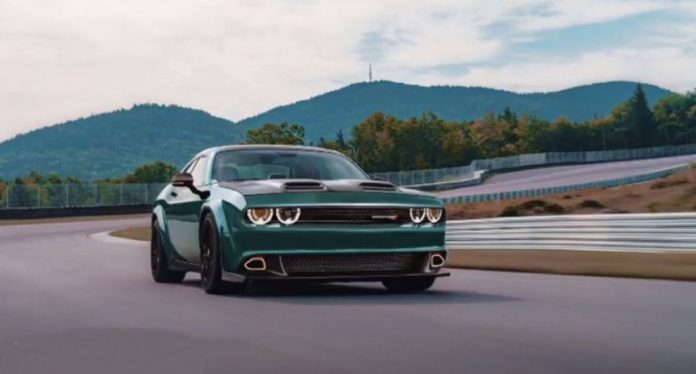 The redesigned 2023 Dodge Challenger will arrive next year, featuring modern and retro styling. This coupe is one of the most muscle cars in the class, and it competes with the likes of the Chevrolet Camaro and Ford Mustang.

For 2023, the manufacturer will make some tweaks, making this car more aggressive than ever. We also expect some changes inside as well, to keep up with its rivals. In general, that’s great news, considering that the Dodge Challenger has been around since 2008 without a major redesign. However, some departments will come unchanged and we expect the same base V6 and three available V8 engines to be offered under the hood.

Is Dodge Coming Out With a New Challenger?

The 2023 Dodge Challenger hasn’t been redesigned since the 2008 model year. However, from the available information, the new model will be a carryover with some tweaks. It comes with massive hood scoops, a chunky front bumper, tall fenders, and attractive four-round headlights.

On the back, we also can expect some small upgrades and the same squared-off rear housing large exhaust pipes and rectangular LED taillights.

Dodge has made some changes inside to help keep the Challenger fresh despite its age. First of all, the cabin should look more attractive and modern with more quality than we saw on the previous variant. In general, we can expect the new Challenger to offer the same spacious interior with enough room for everyone.

The cabin has a simple design and it features standard tech as a 7-inch touchscreen, Android Auto, Apple CarPlay, six audio speakers, two USB ports, and Bluetooth as standard. As optional, the buyers can get an 8-speaker Harman Kardon audio system, a much bigger 8.4-inch touchscreen, and navigation. On the safety front, like the current Challenger, the new one will include adaptive cruise control, blind-spot monitoring, rear cross-traffic alert, forward collision warning, and rear parking sensors.

Under the hood, the new 2023 Dodge Challanger will use the same four engines as the outgoing one. This model uses a rear-wheel-drive on the SXT and GT trims, and a 3.6-liter V6 engine that produces 303-horsepower. Moreover, all-wheel drive (AWD) is offered as an option in both trims. The upper R/T trim brings a 5.7-liter V8 Hemi unit, producing 375-horsepower with a 6-speed manual transmission, while the 8-speed automatic reduces horsepower to 372.

The R/T Scat Pack employs a much potent 6.4-liter V8, rated at 485 horsepower. Unlike other engines above, this one is available with either the manual or 8-speed automatic. The SRT Hellcat is the most favorite option with a supercharged 6.2-liter V8 making 717 horsepower.

Will There Be a 2023 Dodge Challenger?

Reportedly, it should be. We expect the new 2023 Dodge Challenger to start around $30,000 and to go all the way up to $80,000 fully loaded. This muscle car offers several trims and there are four engine options. As you can see, there are many ways to customize your Challenger with your own styling.

Dodge, unfortunately, didn’t reveal when we can expect its debut, but many believe that it will happen in the summertime of 2022. This muscle sports car will compete with the Chevrolet Camaro and Ford Mustang models.