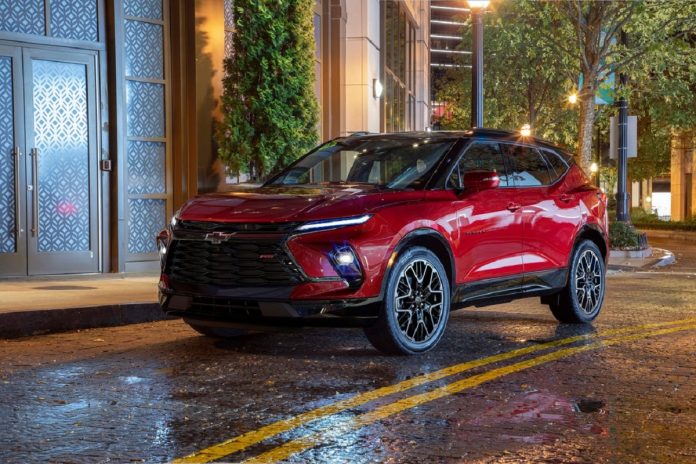 The 2023 Chevy Blazer will refresh the American brand’s SUV lineup later this year. Unlike the off-roader K5 Blazer, the forthcoming SUV will come with a sleek and sporty design. Like the generation before, the Blazer combines Camaro-inspired styling with a great comfort through a 2-row of seats. For 2023, the new SUV will get a modest facelift with a slightly revised exterior, sharing many things with recently refreshed Equinox and Traverse models.

Under its hood, there are two engine options including the base 228-hp turbo-four or an optional 308-hp V6. Both engines are available with all-wheel drive, but the six has a quicker acceleration and ability to tow up to 4500 pounds.

The upcoming 2023 Chevy Blazer is a mid-size SUV that looks very handsome thanks to the Camaro design cues. The exterior design of this model is a definitively highlight that lures many buyers. It’s been called “Camaro-inspired,” and it features the same muscular body lines, lighting profile, and aggressive front end. In terms of size, the new midsize SUV is close to competitors like the Ford Edge and Nissan Murano.

Like before, the Blazer looks more aggressive if it wears sporty RS trim. This model has a 2-tone roof option, as well as two new paint colors, Nitro Yellow Metallic and Blue Glow Metallic.

On the inside, the 2023 Chevy Blazer is heavily inspired by the Chevy Camaro. The new SUV looks comfortable, and it features leather surfaces and flashier materials on the upper trims. However, every Blazer comes standard with a 10.0-inch touchscreen that supports Apple CarPlay and Android Auto capability as well as wireless charging.

The system’s interface is easy to operate and is graphically much better over the previous generation. You’ll also find a pair of USB ports that are located at the front and at the back of the center console. The Chevy Blazer can also be equipped with a Wi-Fi hotspot, eight-speaker Bose system, and built-in navigation as well.

Under the hood, the 2023 Chevy Blazer is available with two different engines. The base model comes with a 2.0-liter four-cylinder that produces 228 horsepower, while the 3.6-liter V6 engine with 308 horses is optional.

Both of the engines use a nine-speed automatic transmission and front wheel drive. Of course, all-wheel drive is available as well, but only as an optional feature. It’s also worth mentioning that the four-cylinder model can tow up to 1500 pounds, while the V6 version can handle up to 4500 pounds.

We recommend the 3LT trim, which unlocks a V6 engine option, and it has towing capacity of 4500 pounds. You can also add the Sound and Technology package that includes a 120-volt outlet, amazing 360-degree camera system, additionally USB ports, a Bose stereo, and a rearview camera mirror.