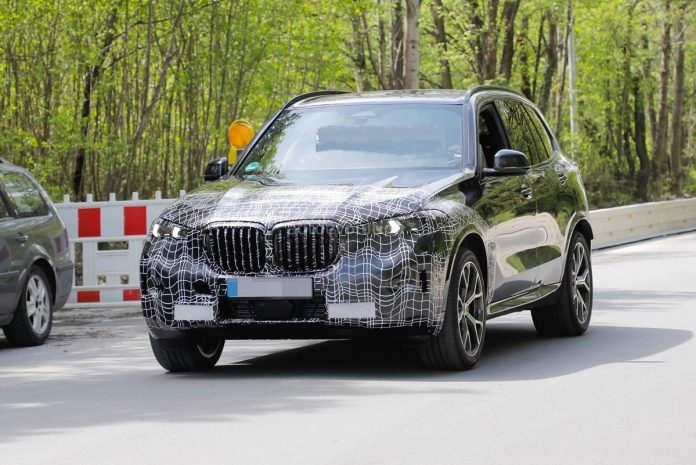 The new 2023 BMW X5 has finally been spied testing. This premium midsize SUV/crossover is attractive, stylish, fun to drive, and insanely fast when you go for the X5 M Competition with a twin-turbocharged engine. In general, not many SUVs can deliver 617 horsepower, but that’s what you get with this mighty version.

For 2023YM, we expect a mild mid-cycle freshening of the exterior and cabin. The BMW X5 should also come with redesigned headlights and taillights, a slightly reworked grille, along with a new wheel designs. As you can see, the manufacturer will try to keep this model up to date against rivals like the Audi Q7 and Mercedes-Benz GLC.

The new 2023 BMW X5 is a SUV that will receive some serious upgrades this year. The prototype that’s caught testing is obviously inspired by the new BMW X7. BMW covered both the front and the rear end, but, for the first time, we can clearly see what is upgraded and changed.

First of all, the BMW X5 looks way better than before, and we like its new taillight graphics. We also noticed some changes on the front end including a more stylish grille, headlights, and some cues borrowed from the new generation 7 Series. Interestingly, unlike the X7 model, the facelift X5 will not adopt the split headlights design.

Inside, the 2023 BMW X5 looks modern, and it offers generous space for adults in both the first and second row, while optional third row is for kids only. Like every other BMW model, the BMW X5 offers awesome tech. This model host very large twin 12.3-inch displays and Apple CarPlay and Android Auto are standard.

It is worth mentioning that one screen serves as a digital gauge display, while the second one provides access to the infotainment system, which runs on the latest version of iDrive software.

Last but not least, the M50i produces 523-hp thanks to a twin-turbo V-8. The most powerful is X5 M Competition that delivers 617 horsepower. All mentioned engines come standard with an eight-speed automatic transmission. It is also worth mentioning that the maximum towing capacity of the X5 is a stout 7200 pounds no matter which engine it has.

The most expensive is a X5 M Competition model that has a price of 100k. Just like before, this model will compete in the same luxury segment with Audi Q7, and the Mercedes-Benz GLC-class models.