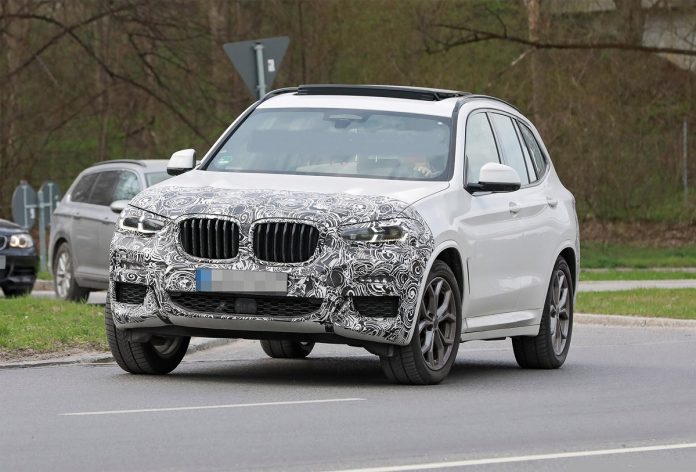 The redesigned 2023 BMW X3 prototype is caught testing recently, featuring a slightly revised body. From the latest reports, the new SUV will debut next year, probably in the second half. The first images of testing mule are available, and X3 looks more compact, wearing noticeable visual changes.

Besides, the manufacturer should also make some changes inside, offering better seats support and plenty of standard features. As before, this model can be chosen with four powertrains starting on a gasoline unit, a 48-volt light hybrid engine, a plug-in hybrid X3 xDrive30e, and the new iX3 electric SAV.

The first-ever spy shots of the upcoming 2023 BMW X3 have emerged online. Unfortunately, the new model is heavily camouflaged, mainly on the front and rear ends. However, we noticed a minor redesign at first glance, including an attractive separated grill and new headlight graphics.

The griller looks slightly more prominent compared to the outgoing model. Interestingly, the side profile remains the same, and we only noticed a new gray wheels. Nevertheless, the rear end features slimmer taillights, similar to what we saw on the latest X5 model.

Inside, the 2023 BMW X3 will be more driver-oriented than before. This compact SUV is modern, and the manufacturer is adding more technology to stay competitive. Considering that, we should expect a much bigger infotainment system and many standard pieces of equipment. The outgoing model comes standardly with an 8.8-inch touchscreen or an optional 10.25-inch display.

Beneath the hood, the latest 2023 BMW X3 come with a choice of four engines. The base models sDrive30i and xDrive30i are powered by a 2.0-liter turbocharged 4-cylinder developing 248 horsepower. Moving up to trim above, the X3 M40i comes with a turbocharged 3.0-liter inline-6 producing 355 horses and 369 lb-ft of torque.

The xDrive30e plug-in hybrid version is the next choice available with a turbocharged 2.0-liter and battery-fed electric motor. Thanks to this combination, the PHEV model makes 288 horsepower and 310 lb-ft of torque. This model can travel up to 18 miles on electricity alone. Lastly, the most potent X3 M uses a twin-turbocharged 3.0-liter inline-6 making 503 horsepower in competition form. All models use an 8-speed automatic transmission and Xdrive system.

From the news, the upcoming 2023 BMW X3 will debut sometime in the second half of the following year. As we mentioned in some of the earlier posts, BMW has a plan to redesign all the fleet of X models. From what we heard, at the same time as the X3 release, the manufacturer will also introduce BMW X4 with a mild facelift. Pricing is not yet available, but it should be increased over the current one.