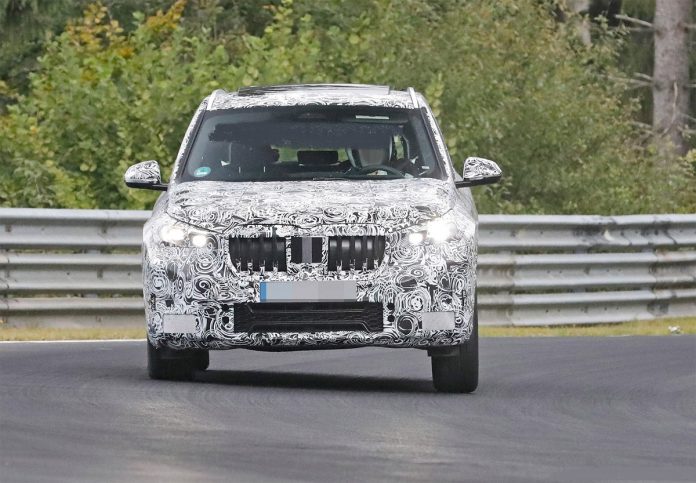 The 2023 BMW X1 is in testing testing stage, and the latest spy shots reveal a much better-looking design. As you may know, this small crossover SUV is one of the most compact models in the segment, and it looks handsome with a new styling theme.

Even heavily camouflaged, we noticed some redesign that would bring a bolder look than the current model. At first glance, the X1 prototype looks wider, featuring a more attractive shark nose grille. However, the rest of the design seems to be an evolution of the current model. According to BMW, the forthcoming X1 will ride on the new FAAR platform, an updated UKL platform underpinning the current X1.

The upcoming 2023 BMW X1 will use a new platform featuring BMW’s latest front-wheel-drive architecture designed for compact cars. This platform is known as FAAR and is an updated version of the current UKL platform. It made its debut in late 2019 and is used for the first time on the redesigned 1-Series hatchback, and later it appeared in the 2-Series Gran Coupe model.

The biggest change compared to the current one is that it can hold battery-electric powertrains. As for styling, the new BMW X1 is much bolder than the current model. It looks wider, featuring a more attractive shark nose grille.

Unfortunately, there is no statement on what we can expect inside. There is one spy image inside, but we don’t know what’s new due to the camouflaged dashboard.

As per some gossips, the manufacturer will add as standard equipment the new virtual cockpit and a much bigger infotainment system compared to the currents 8.8-inch display. We also can expect standard USB-C ports, Bluetooth audio streaming/phone connectivity, Apple CarPlay smartphone, and Android Auto integration. The M Sport package will add more luxury like sportier front seats, carbon details, and extra M badges.

As we mentioned initially, the new 2023 BMW X1 will ride on the new FAAR platform, which is an update of the UKL platform underpinning the current X1. The most significant change, according to officials, is that there will be an optional battery-electric powertrain. The electric X1 model is likely to be badged as an iX1. As far as we know, the manufacturer will offer at least 13 battery-electric models by the end of 2023.

Besides, the BMW X1 will also arrive with other powertrain options that should include 1.5-liter inline-3 and 2.0-liter inline-4 engines, both turbocharged. Mild-hybrid technology will be on offer as well, as an plug-in hybrid setup.

The new 2023 BMW X1 will probably arrive sometime next year with mild upgrades. Many believe that it will be available for purchases before fall. As mentioned, BMW is working to bring out at least 13 battery-electric models by the end of 2023, on which the first one is the upcoming iX1.

We doubt that the next 2023 X1 will remain in range as its predecessor. The current base front-wheel-drive version costs about $36,000, while all-wheel drive is likely to be a thousand dollars more. As for the electrified iX1, the starting price of $50,000 seems acceptable to rival other models.