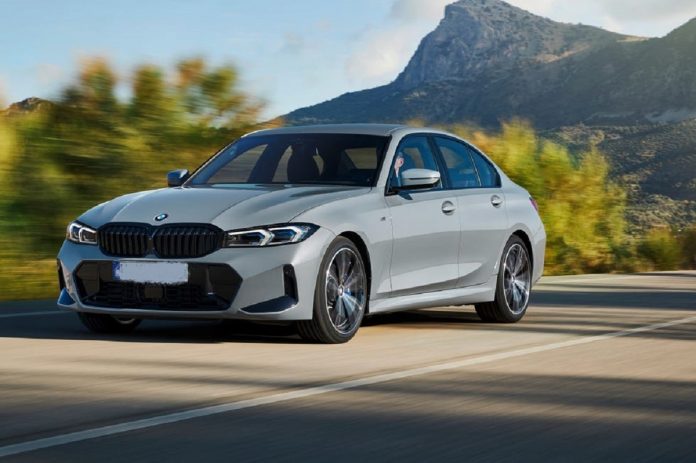 The 2023 BMW 3-Series has been revealed, featuring updated styling with an angular front bumper and slimmer LED headlights. Beside exterior upgrades, the new model will also get some changes inside as well. From the first images that are available, the new BMW 3-Series will come with a curved display that combines a 12.3-inch digital gauge cluster and a 14.9-inch infotainment screen.

However, some good stuff remains the same, and we expect the engine lineup to be carried over. The current 330i model is using a four-cylinder engine, while the 330e comes with a four-pot paired with an electric motor. The most powerful M340i is also powered by the same inline-six.

The recently revealed 2023 BMW 3-Series model looks refreshed, featuring more aggressive look. It dominates with a new and bigger kidney grille, as well as with new headlights. As standard, the BMW 3-Series comes with a stylish 18-inch wheels, and we like a new Skyscraper Grey paint color.

However, stepping up for the M Sport package, you’ll get unique 19-inch wheels and specially designed adaptive M suspension with electronic damping. The rear of this sedan is also attractive, and we like new taillights that are slightly thinner than before. The redesigned rear fascia also incorporates vertically-oriented reflectors set into black housings.

Inside, the 2023 BMW 3-Series will get a complete redesign. The new model will reportedly offer a sportier interior and some new technology. As we noticed in the first official image, the forthcoming model hosts a curved display that combines a 12.3-inch digital gauge cluster and a large 14.9-inch infotainment screen.

Like on other BMW models, the manufacturer reduced the number of buttons and controls, and added touch and voice controls. A 5G connectivity is also available, and it supports up to 10 digital devices. The air vents have also been redesigned, and they are giving a sportier look, just like a gear knob with a small lever.

Under the hood, the 2023 BMW 3-Series engine lineup remains the same. This means we can expect the base 330i to use a turbocharged 2.0-liter inline-four that produces 255-hp. The plug-in hybrid 330e comes with the same inline-four but paired with an electric motor.

Combined, they produce 288 horsepower and provide 23 miles of all-electric range. The most powerful version is the M340i, and it uses a turbocharged 3.0-liter inline-six with 48-volt hybrid technology. Unlike the models above, this one delivers the strongest output of 382 horses. All engines come standard with an eight-speed automatic and are available with optional all-wheel-drive.

The 2023 BMW 3-Series will debut in the United States in July of this year. We must agree, the new sedan looks better than ever. It features a very attractive, sharp design and revised interior. The pricing details of this sedan are not yet available, but we expect it to be closer to the on-sale date.