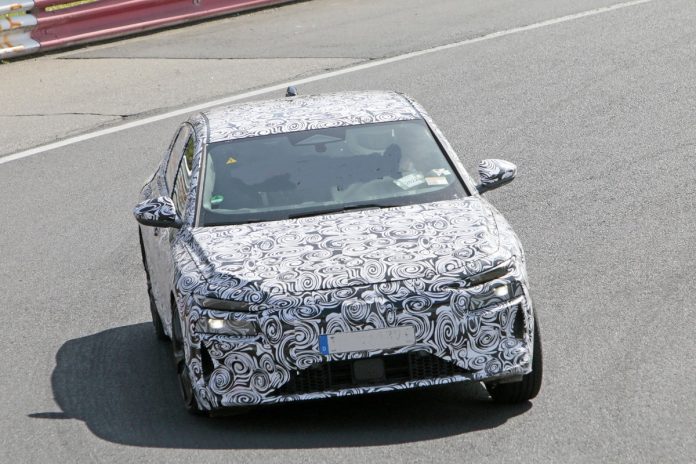 The 2023 Audi A6 e-tron has been spied testing recently with the new split headlights. Thanks to the latest spy shots, we have our first look at this luxury sedan. First of all, the new model features a soft, flowing shape and sharp creases, along the flanks and at the rear. The upper section houses LED daytime running lights, the lower one houses the low- and high-beam units.

Under the skin, the upcoming A6 e-tron will use the PPE (Platform Premium Electric) architecture that’s developed by Audi and Porsche. The same platform is mentioned to be installed on the upcoming Porsche Macan and the Q6 e-tron.

The forthcoming 2023 Audi A6 e-tron looks more futuristic than any Audi so far. First of all, the spied sedan is wearing a new design with a soft shape, sharp creases, along the flanks and at the rear.

The blanked-out grille and slim LED headlights are present, giving this model a very eye-catchy design. As we can see, the upper section house LED daytime running lights, while the lower one has low and high-beam units. At the rear, the short rear deck has been carried over from a concept model, but the taillights are thicker than before. Some renderings are also available, and they also reveal an Avant model with the same attractive design.

Right now, there is no available image of the new 2023 Audi A6 e-Tron cabin. However, as the flagship Audi e-Tron GT and Q4 e-Tron, we expect this model to share many design cues. This means we assume the same high-quality materials and a pretty comfortable cabin as well. Two large screens could also adore the dashboard of the upcoming model, as well as many advanced techs.

The 2021 concept uses a 100kWh battery pack, and it supports fast charging at up to 270kW. This model was advertising to offer 700 km of range under the WLTP test cycle. However, Audi said that the new A6 e-tron would be available in both rear and all-wheel drive formats.

Also, they reveal that the upper model will have 350kW and 800Nm at its disposal. Overall, it seems that the new Mercedes-Benz EQE will finally get a very tough rival.

The new 2023 Audi A6 e-tron will likely start at around $66,000 for the base model. However, the upper ones that come with larger batteries can touch a price of $85,000 or even more. As we mentioned, the new model has been spied recently wearing a completely new design language.

It will reportedly use the PPE (Platform Premium Electric) architecture that will also be available on the upcoming Porsche Macan and the Q6 e-tron models. As for the release date, we expect the new Audi A6 e-tron to come this year, while sales could start soon after.

2023 Tesla Roadster: Everything We Know So Far