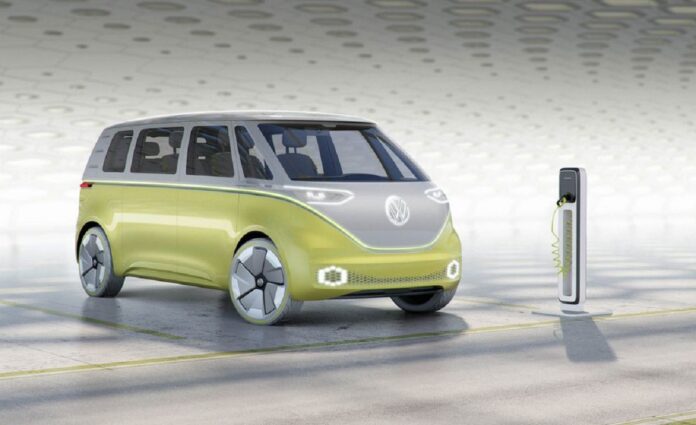 The concept model 2022 VW Microbus could soon become a reality. Recently, the manufacturer released some of the new photos, and the upcoming VW Microbus called I.D. Buzz aims to address markets worldwide. This all-electric model offers a beautiful and nostalgic aesthetic with some of the futuristic lines.

According to VW, Microbus is ready to provide around 300 miles of driving range. Alongside this, the cabin is modern and is featuring flexible seating configurations and plenty of latest techs. The VW still has to make its official debut, but here’s what we know so far.

From the latest VW statements, many future models will include some sort of autonomous technology. In theory, that means VW Microbus could use this technology and actually drive itself. If that happens, the VW company will be the first one that uses this tech on the Van. In terms of styling, 2022 VW Microbus features retro design.

This model also called the I.D. Buzz concept uses the new MEB modular EV platform, and it takes many design cues from Type 2 Microbus. It features a two-tone paint job, blunt front end and large VW badge in the middle. Also, we like its massive 22-inch wheels and wraparound LED lights that modernize the design of this Van.

One of the most exciting news of forthcoming 2022 VW Microbus is inside. Stepping in, you’ll notice a very comfortable and techy cabin. From what we heard, the new passenger van will come with three rows of seats that can be removed completely. Generally, thanks to that, this model offers a lot of room for activities.

Moreover, one of the interesting features is the movable center console. One can slide it forward and back on a track. We’re not sure how this will be functional in reality. The new photos also reveal the Microbus’s dashboard-mounted touchscreen that supports Apple CarPlay, Android Auto, and a Wi-Fi hotspot.

Volkswagen revealed some information about the concept’s electric powertrain. According to them, the new 2022 VW Microbus will come with electric motors on the front and rear axles. Thanks to that, it will be able to generate a combined 369 horsepower. Interestingly, all-wheel drive is standard. As we mentioned, there will also be a cargo version that produces 201-hp thanks to the electric motor at the rear. Also, if you go for an all-wheel drive, you will get a second front-mounted electric motor.

VW says the Buzz Cargo model will use a battery capacity that starts at 48 kWh and can be increased to 110 kWh. The company promises driving ranges of 200 and 340 miles, respectively VW also claims that with D.C. fast charger, one will be able to charge 80 percent in little as 30 minutes.

We are still waiting for the official confirmation about the debut of 2022 VW Microbus. However, we heard that the final model would be shown next year, and the release could happen soon after that. The popular website caranddriver listed that the upcoming 2022 VW Microbus will start at $40,000 for the base model.

2023 Volkswagen Tiguan Gets the Styling Update It Deserves